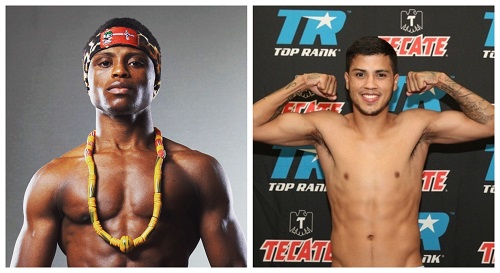 But, the Ghanian boxer has announced that he will be returning to the ring this Saturday to face a different challenger in Mexican American boxer Chris Avalos.

It will be the fight time the dethroned champion will be mounting the ring since his double loss to Emmanuel Navarette. Dogboe lost his world title to Navarrete in two consecutive fights in December 2018 and May 2019.

The former world champion, 25, who is currently not rated on any of the sanctioning bodies rankings and will be hoping to use the fight against Avalos to get himself back into the world title picture is earnestly waiting for Saturday to begin fighting his way to the top of boxing again.

He took to Twitter to reveal his excitement at getting back to the ring again.

Isaac Dogboe’s opponent is a 30-year-old who started his boxing career in 2008.

All you need to know about Chris Matthew Avalos

Chris Matthew Avalos is an American boxer of Mexican descent and was born on November 5, 1989.

Born in San Diego, Avalos is now based in Lancaster and has quite a Mexican following.

Avalos is nicknamed ‘Hitman’ for his heavy punches. Fellow boxer Leo Santa Cruz described him as a ‘tough fighter’. He is an orthodox fighter which means his strength is in his right hand.

Since making his professional debut in 2008, Avalos has fought 34 times, having won 27 and lost 7 times.

20 of those victories have come by knockouts with three of the defeats also by same.

His last bout was a defeat against Puerto Rican boxer Abimael Ortiz.