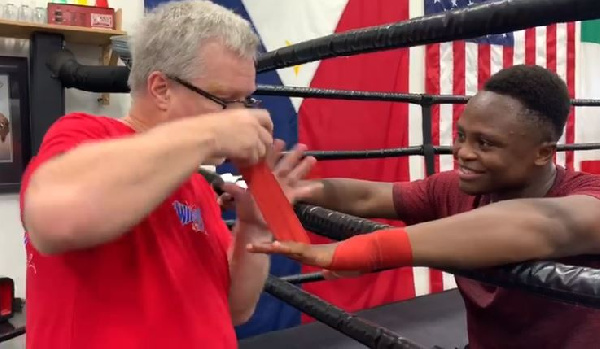 Father and trainer of Isaac the â€˜Royal Stormâ€™ Dogboe, Paul Dogboe has revealed why his son parted ways with Boxing Hall of fame coach Freddie Roach.

After two successive loses to Emanuel Navarette the camp of Isaac Dogboe decided to change their strategy as the dethroned champion joined the camp of Manny Pacquiao's trainer Freddie Roach.

However, their relationship didn't last long as both parties decided to go on their separate ways due to time factor.

Speaking in a radio interview, Paul Dogboe noted that his son couldn't be mentored by the Boxing Hall of Famer because he couldn't adjust to his new boxer's time.

"We went to Hollywood, that's where Freddy trains and when we went there, there are about 8 serious boxers there and everything was nice and great but we will say it wasn't the right fit for Isaac Dogboe because, I am the right fit for my son as to how he made it because if you have to study and box, you need to have a coach that is dedicated to your time. its not about the coach's time because now the kid is a world champion and the coaches have to adjust to the champions time," he told Joy FM.

"We cannot adjust to the coaches time to suit the boxer. Freddy Roach had time but he has his own time and the time that he does his things, so we had to fit into it."

Paul added that they kept searching for a new trainer who could fit into the boxer's time and they settled onÂ Patrice Harris and Barry Hunter.

"So went to Freddy Roach and other coaches and found the right fit for Isaac, that is Patrice Harris and Barry Hunter."