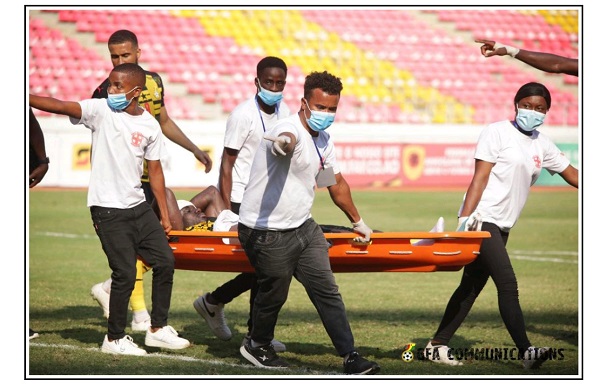 Black Stars defender Jonathan Mensah is in a stable condition and responding to treatment at a private hospital in Luanda, Angola after suffering head injury during Ghana’s game against the Central African Republic (CAR) on Sunday.

Mensah and a CAR player collided while going in for a header. The defender fared the worst, requiring treatment on the field for more than 10 minutes.

There was huge concern from both sets of players and Mensah was carried off on a stretcher before being taken to the hospital in an ambulance.

“The defender suffered a headbutt from an opponent resulting in a concussion. He was given emergency treatment on the pitch before being rushed to the hospital for further treatment,” the GFA said on Sunday evening.

“CT Scans confirmed normal findings but would have to spend the night at the hospital for further assessment and evaluation.”

“We would like to call on Ghanaians, friends and family to remain calm as the Black Stars medical team works around the clock to get him back on his feet.”

The Black Stars of Ghana meanwhile could not maintain their 100% record in the AFCON 2023 qualifiers as they were held 1-1 by Central African Republic in Luanda on matchday two.

Otto Addo and his lads were hoping to make it two wins in two games in the qualifying series and took the lead very early on in the first half.

Ajax Amsterdam player, Mohammed Kudus scored on the 17th-minute mark to give Ghana the perfect start.

Ghana’s goal was cancelled out by Karl Namnganda just before half time to bring the Central African Republic back into the game.

The Black Stars will return to the AFCON qualifiers in September when they play Angola in back-to-back games.

Immediately though, Otto Addo’s side will quickly turn attention to the Kirin Cup which will be played in Japan.