Just in: Lionel Messi confirms he will stay at Barcelona 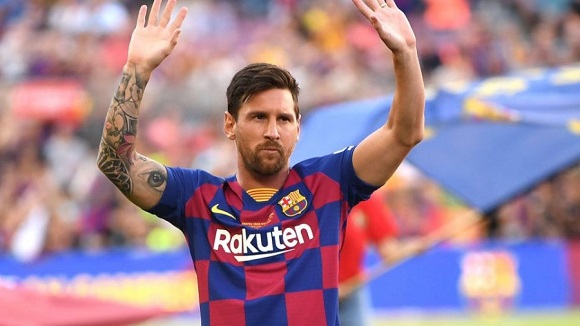 Lionel Messi has confirmed he will begrudgingly stay at Barcelona and hinted his desire to avoid a courtroom battle was the overriding reason behind his decision.

The superstar's bombshell U-turn was officially announced on Friday evening, although Messi has once again doubled down on his criticism of the board and its under-fire president Josep Bartomeu.

The 33-year-old club captain announced he is finally abandoning attempts at a move to Manchester City this summer in a recorded interview despite having initially demanded to leave.

Messi told Goal in an explosive admission: 'When I communicated my wish to leave to my wife and children, it was a brutal drama.

'The whole family began crying, my children did not want to leave Barcelona, nor did they want to change schools.

'But I looked further afield and I want to compete at the highest level, win titles, compete in the Champions League. You can win or lose in it, because it is very difficult, but you have to compete.

'At least compete for it and let us not fall apart in Rome, Liverpool, Lisbon. All that led me to think about that decision that I wanted to carry out.'

The talisman also revealed he had never considered taking his boyhood club to court in order to free himself from his deal.

Messi had appeared to be willing to fight on when his father issued a statement reiterating his claim that he does not have a €700m release clause.

His father Jorge issued the statement on Friday that appears to quote directly from his contract stating: 'The release clause will not apply when the unilateral resolution of the contract comes into effect after the end of the 2019-20 season.'

The statement also slammed La Liga for wading in on the debate last week and claiming Barcelona were right to demand €700m from anyone who wanted to sign Barcelona's captain.

'We don't know what contract they have analysed,' it said. Also condemning their 'obvious lack of impartiality' in the matter.

But the statement from Messi's father appears to have been the last shot fired before the white flag was raised.

Not having a release clause could have drastically changed things for Manchester City if the Barcelona captain had been prepared to rip up his contract and let a tribunal decide his transfer fee.

But La Liga responded immediately reiterating their position and accusing the Messi statement of having taken the clause quoted from his contract out of context.

La Liga put its weight behind Barcelona's claim Messi was under contract for one more year and with a €700m buy-out clause, with a statement issued August 30.

The statement said: 'The contract is currently in force and has a release clause applicable in the event that Messi decides to unilaterally terminate it.'

La Liga's statement also threatened to block his move away although that would be beyond its juristition if Messi moved from Spain to England.