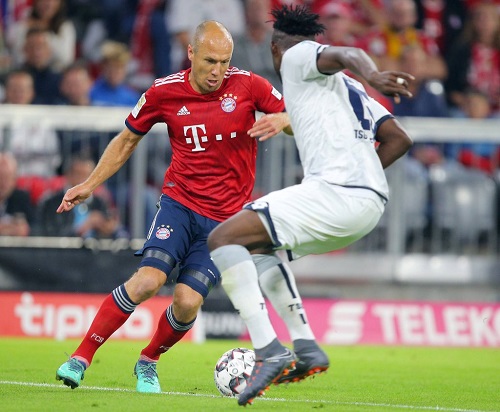 Ghanaian defender Kasim Nuhu Adams made his Bundesliga debut as his side Hoffenheim loss 3-1 to Bayern Munich.

The former Young Boys defender started in a three-man defensive set up alongside Vogt and Bicakcic.

Not the results we wanted yesterday. We moving on to the next one and continue to fight for the badge and fans...@achtzehn99_en ?⚪️ pic.twitter.com/7jmsZm5c9w

Thomas Mullar’s 23rd-minute opener for Bayern Munich was cancelled out by Adam Szalai to leave the Bavarians seeking for an opening win in the Bundesliga.

Late drama at the Allianz Arena proved costly for the visitors as they slipped to an eventual 3-1 triumph thanks to a rebound from Arjen Robben after Lewandowski’s spot-kick was saved.

Kassim Nuhu Adams lasted the entire 90 minutes of the game for the visitors at the Allianz Arena.