Kevin-Prince Boateng: The gifted, abused and unpredictable star who forged a unique path through the game 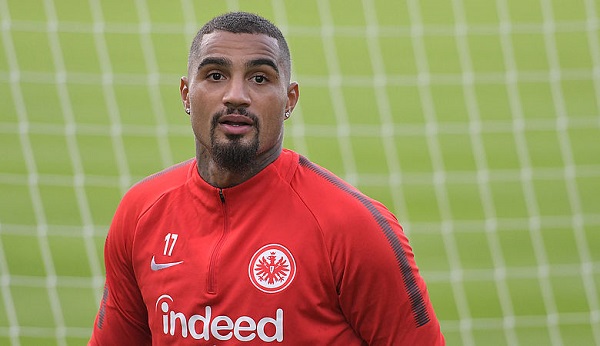 Kevin-Prince Boateng: The gifted, abused and unpredictable star who forged a unique path through the game

Not many footballers shine in the shadow of their more successful, superstar brother. Kevin-Prince Boateng’s frequent flashes in a pan have lit up each club, league and country he’s stopped by in his nomadic tour across Europe and the world.

His eccentric and sizzling personality is reflected in his unpredictable game, one full of tricks, power and controversy. His relationships with his peers, counterparts, clubs and countries have been tumultuous to say the least, in a crazy career that has taken in Berlin, London, Milan, Johannesburg and Accra.

Born in Berlin to a Ghanaian father and German mother, Boateng took his first steps in football with Hertha Berlin at the age of seven, joining the academy seven years before his half-brother, Jérôme. Kevin-Prince and Jérôme shared the same father but were born to different German mothers a year apart.

By the age of 18, Kevin-Prince was making his professional debut for Hertha, spending the second half of the following season playing alongside Jérôme in the Bundesliga. That was until the summer of 2007, which saw them split as Kevin-Prince joined Tottenham and Jérôme went to Hamburg. The two haven’t played together in a competitive game since.

Kevin-Prince Boateng watched from the stands as Tottenham lifted the Carling Cup at Wembley during his first season in England, though at such a young age, he failed to make a real impact in the Premier League and returned to Germany in January 2009. A loan spell under Jürgen Klopp at Borussia Dortmund didn’t do his disciplinary reputation any favours – a four-match suspension for a kick to Makoto Hasebe’s head during a game with Wolfsburg the most memorable moment.

At the age of 22 and after 20 appearances for the Germany youth sides, Boateng chose to switch his international allegiance to the country of his father, Ghana. His debut for the African nation didn’t come until a year later after FIFA’s alteration of the rules stagnated the process.

By then, Boateng had spent another season in England, making 22 Premier League appearances as financially-stricken Portsmouth were relegated. Another final against Chelsea under the Wembley arch made him an unpopular person back in Germany as tensions between Boateng and the Joachim Löw’s national team hit new heights.

Didier Drogba’s sublime free-kick won the FA Cup final for Chelsea, but Boateng’s challenge on Michael Ballack lost him the respect of many in the country of his birth. The German midfielder managed to nip the ball away before Boateng caught him on the ankle and then followed through onto his knee. Ballack was forced off and ended up missing the World Cup, much to the dismay of Löw and his squad.

Having made enemies back home, Boateng lined up alongside his Ghana teammates for the first time against Latvia in Accra. Due to an injury to Michael Essien, the shining beacon of Ghanaian football at the time, Boateng found himself in contention for a starting spot in South Africa that summer.

It was beside Anthony Annan in central midfield that Boateng made his first World Cup appearance in the opening group game against Serbia. With the scores level heading into the final ten minutes, Boateng waited on the edge of the penalty area as a cross came in from the left. With his body positioned perfectly to catch the stray ball on the volley, Serbia’s Zdravko Kuzmanović panicked handball denied him a goal, though it allowed Asamoah Gyan to convert from the spot to give Ghana all three points.

Another spot-kick from Gyan saw the Black Stars pick up a point against Australia before two brothers faced off in Johannesburg. Jérôme and his German teammates were up against Kevin-Prince’s Ghana, with the European powerhouse needing a win to progress after defeat to Serbia.

Mesut Özil’s winner came from the edge of the box on the hour-mark but, thanks to Australia’s win over Serbia, Ghana were through to the knockout stages for a second successive World Cup. Landon Donovan’s dramatic finish against Algeria set-up a last 16 meeting between the USA and Ghana in Rustenburg.

With Ghana proving to be the only African nation to make it through the group stages, the whole continent swarmed into position to back their remaining representative in a flurry of colour and noise.

The United States’ Ricardo Clark, like many others, was caught out by the capability of Ghana’s midfield as Kwando Asamoah robbed him of the ball in the centre circle. It fell to Boateng, the 23-year-old drove deep into American territory before slotting past Tim Howard at his near post, much to the delight of the home crowd. Donovan’s second-half penalty took the tie to extra time before Gyan’s pace and power proved too much for the US defence before the striker fired home.

Fans around the world were enjoying the excitement and exuberance this Ghanaian side had to offer. However, with soaring highs often come agonising lows. Uruguay were the only ones standing between Ghana and a semi-final spot – something no African nation had achieved before.

Sulley Muntari sent the continent wild with a goal from distance before Diego Forlán curled the South Americans level from a free-kick. Then it came. Adiyah’s header, Suárez’s hand, and Gyan’s heartache. All in a manic couple of minutes. The shoot-out finished before Boateng could take his penalty. Ghana, and the rest of Africa, were out. “After getting out of the group it was definitely our aim to reach the semi-finals,” Boateng told FIFA years later. “I think we deserved to as well, people could see how much passion there was in our game, we had the fans and the whole continent behind us.”

A co-ownership deal saw the midfielder move to Italy and become a Genoa player, lining up for the first Serie A game of the season in the famous red and black of AC Milan after immediately moving there on loan. The deal was made permanent after an impressive first campaign that ended with the Rossoneri winning the Scudetto under Massimiliano Allegri.

Boateng slotted into a star-studded team that included the likes of Zlatan Ibrahimović, Andrea Pirlo, Clarence Seedorf and Ronaldinho, with the Ghanaian adjusting to a more advanced role at the head of a four-man diamond. A return to White Hart Lane came in the Champions League last 16 but the Italian side were unable to overcome their first-leg defeat at the San Siro.

When you think of Kevin-Prince Boateng, you most likely associate him with the skilful, physical aggressor in Milan’s midfield during his second season in Italy. An unforgettable strike against Barcelona in the Champions League group stages combined technical ability with raw power, as a heel-flick took him beyond Éric Abidal before firing past Victor Valdés at his near post.

At times he could win games on his own. Never was this cliché more applicable than an unassuming trip to Lecce in October 2011. The Serie A minnows found themselves 3-0 up against the champions in front of their own fans at half-time. With more hope than expectation, Allegri threw Boateng into the action from the bench and the match was turned on its head.

A sweetly-struck volley from the left foot of Boateng made a comeback appear possible, if still slightly miraculous. Boateng then sent another first-time effort flying into the top corner from the edge of the 18-yard box to make the Milan fans believe. Suddenly, Lecce’s defence was panicking, looking over their shoulders in fear rather than precaution.

Massimiliano Benassi couldn’t keep Boateng’s third out at his near post and, with a hat-trick after 20 second-half minutes, Boateng had hauled his team level. Mario Yepes completed the extraordinary turnaround inside the last ten minutes, though the scoreline only reflected the impact of one man.

The midfielder’s goalscoring exploits came to the fore once again when Arsenal visited the San Siro in the Champions League last 16. Boateng nipped between Laurent Koscielny and Thomas Vermaelen and latched onto Antonio Nocerino’s clipped ball before unleashing an arching half-volley that crashed in off the crossbar. Barcelona denied them a place in the last four but that disappointment was put into perspective in Boateng’s final year in Italy.

A mid-season friendly at fourth-tier Pro Patria saw the Ghanaian subjected to shocking racist abuse from the stands. His decision to walk off the pitch and the subsequent abandonment of the game was commended by people across the world, both in football and out.

Later that season, goals from Ghanaians Boateng and Muntari gave AC Milan a commanding lead going into the second leg of their Champions League last 16 tie with Barcelona at the Camp Nou. However, a Lionel Messi-inspired Blaugrana put four past a despairing Christian Abbiati to send the Rossoneri packing before the last four again. Antonio Conte’s Juventus were the Scudetto winners again in May before Boateng said his goodbyes to calcio.

Schalke profited from a determined Boateng during his first two seasons back in the Bundesliga before an ill-tempered fall-out resulted in his contract being terminated halfway through the 2015/16 season.

While the Boateng brothers met each other a few times during Kevin-Prince’s second stint in Germany, their most high-profile face-off came at the World Cup in Brazil in 2014. By then, Jérôme had fully established himself as one of the best central defenders in the world and would be a stalwart in the German side that would lift the trophy in Rio.

The group stage match between Germany and Ghana was hotly contested and entertaining to watch. Kevin-Prince had to make do with the role of spectator until the 52nd minute, when he made an appearance off the bench, immediately after Mario Götze’s opener. Two minutes later, Ghana were level through Andre Ayew, before Asamoah Gyan fired past Manuel Neuer to give the Black Stars an unlikely lead. Miroslav Klose netted an equalizer in the 71st minute as both teams settled for a point.

Ghana’s prospects of progression to the knockout stages seemed slim going into their final group game with Portugal, and preparations weren’t helped by Boateng and Muntari. Both were expelled from the squad on the eve of the game and left to travel home in disgrace. “Everything – the hotels, the flights – everything was amateurish,” Boateng told Bild after the tournament. “It was a nightmare from the first day of the preparation to the end.

“The flight from [pre-tournament preparations in Miami] to Brazil took 12 hours and we sat concentrated in economy class. The legs ached. It sounds strange for an average citizen, but for a competitive athlete that is a disgrace. The FA president sat in business class with his wife and two children. And then in Brazil, we finally had a charter flight but my luggage was lost. Two days without football boots – it was a disaster. We were not a real team. Everyone was busy with themselves.”

And so, after a brief return to international football, Boateng retired from representing the country of his father for the second time. Since his departure from Schalke, he’s spent time in Spain, Germany and Italy, with Las Palmas, Freiburg and Sassuolo respectively.

His nomadic march across Europe has been dashed with genius and controversy, brilliance and altercation, but one thing is for sure, he did it all hos own way.
Latest Sports News in Ghana