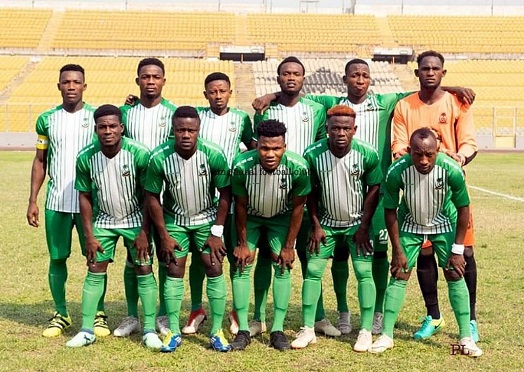 King Faisal FC have been declared losers of their protest case against WAFA.

In its protest to the Disciplinary Committee, King Faisal claimed that WAFAâ€™s goalkeeper played in an unregistered strip for their Ghana Premier League Day 9 match at the Baba Yara Stadium.

However, after checks from the Competitions Department, the Disciplinary Committee found that WAFA had registered the goalkeeperâ€™s strip and used the strip as indicated on the start list for the match.

King Faisal have been charged an amount of GHc2000 for filing a frivolous protest.

Below is Disciplinary Committeeâ€™s Findings and Decision:

FINDINGS AND GROUNDS OF THE DECISION

According to the Petitioner, the Respondent should suffer forfeiture for playing in an unregistered strip contrary to Article 16(1)(a), Article 33(1)(i) and Article 33(4)(b) of the Premier League Regulations. King Faisal FC alleged that the Goalkeeper of WAFA played in Yellow(shirts), Yellow(shorts), Yellow(hose) instead of Green(shirt), Green shorts, Grey(hose) or the reserve colours, Red (shirt), Wine & red (shorts), Wine(hose).

This Committee finds as follows:

1. That on Monday, December 23, 2019, the Competitions Department of the GFA emailed the compiled list of Declared Strips of all clubs to all Premier League Clubs. The email asked clubs to inform the GFA if there are any discrepancies within a stipulated period.

2. That WAFA amended their strips upon receipt of the email sent to the clubs.

3. That on the day of the said match, WAFA presented their amended strip at the Pre-Match Technical meeting. It is noted that there was no protest or contention with regards to the strip declaration of WAFA strip.

4. That the Start List which was generated by the Competitionâ€™s Department for the match in question assigned the following colours to WAFA:

5. It is clear to the Committee that at all times, the registered strips of WAFA was stated and available for all to know was Yellow, Yellow and Yellow for the Goalkeeper.

6. It is the holding of this Committee that WAFA wore the right strip for the match as evidenced on the Strip Declaration Form deposited at the Competitionâ€™s Department of the GFA as sent as part of the Start List sent to two clubs and as stated on the Referee & Match Commissionerâ€™s reports.

1. The protest of King Faisal FC therefore fails since the strips used by WAFA in the match was duly registered with the GFA pursuant to Article 16(1)(a) of the Premier League Regulations.

2. The King Faisal FC is hereby fined an amount of Two Thousand Ghana Cedis (GHc2,000.00) for bringing a frivolous protest to the Disciplinary Committee.

3. That should any party be dissatisfied with or aggrieved by this Decision, the party has within one (1) days of being notified of this Ruling to appeal to the Appeals Committee of the Ghana Football Association {See Article 35(10) of the Premier League Regulations of the GFA}.