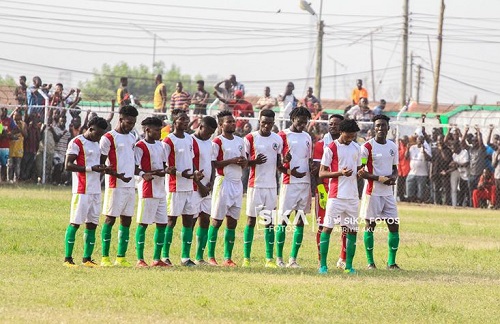 The Porcupines are seeking to beef up their squad with the Eleven Wonders attacker as the second transfer window has been opened.

According to the spokesperson of Eleven Wonders,Â Â Ali Mohammed the Kumaai-based club have inquired about their playerÂ

â€œYes, in football every club have the right to show interest in players. So it is true Kotoko have shown interest in Salifu Ibrahimâ€ he told Bryt FM.

He added that among other clubs interested in their star is Hearts of Oak.

In a related development, Asante Kotoko have augmented their striking department with the capture of former Nkoranza Warriors player Kwame Opoku.

Head coachÂ  Maxwell Kotoko has heaped praises on his new acquisition and hopes he hit the ground running when the league resumes.

"Kwame Opoku is a good striker; he is very quick and has an eye for goals, and as a striker that is what is required. Once he is able to score goals that's very ok. His signing is in line with what we are looking for."

"He brings something special onboard. Every player has his qualities and Kwame also has the way he plays. His style is not like the others. Kwame brings something onboard that I think would help the team as a whole. He has very powerful shots and he's very good in the air too so he would help us."