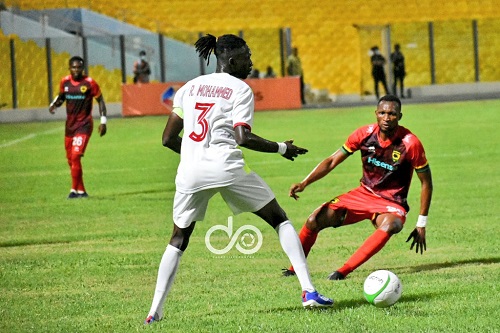 The midfielder who featured in his first competitive game for the Porcupines since his switch, picked up an injury in Sunday's stalemate against Eleven wonders at the Accra Sports Stadium.

Anabila who joined the Porcupine Warriors in October on a free transfer after his deal with Ashantigold SC expired will be having his scan today and the extent of his injury will be determined.

Meanwhile, the Kotoko head coach has called on his supporters not be down spirited by Sunday's draw as the team will come good in subsequent games.

The Porcupines were held to a 1-1 draw at the Accra Sports Stadium in their opening fixture of the 2020/21 season.

Reacting to the game, Konadu said the visitors were a hard nut to crack for his outfit.

But once it's the first match of the season, we will take a cue out of this and try to build up much better in the subsequent games."

"Gelling together is not easy, we will need time but unfortunately, time is not on our side so I hope will play much better in the coming games. I urge my supporters to keep calm."

Kotoko play as guest to Berekum Chelsea on Sunday, November 22 at 3:00 pm.