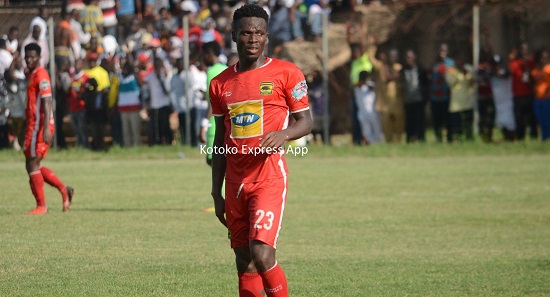 Asante Kotoko attacker Abdul Fatawu Safiu has disclosed that he believes he did not push himself hard enough to make Ghana's AFCON squad.

Asante Kotoko attacker Abdul Fatawu Safiu has disclosed that he believes he did not push himself hard enough to make Ghana's AFCON squad.

After days of waiting, coach Kwesi Appiah on June 10 revealed the final 23-man squad who will be seeking to annex Ghana's 5th trophy that has eluded the nation for the past 37 years.

Dead ball specialist Fatawu Safiu was axed while shot-stopper Felix Annan made the final list as the only local-based player for Black Stars AFCON 2019.

Speaking on his axing from the team,  Fatawu Safiu shared that he is disappointed with himself because he could have worked a bit harder at the training camp.

However, he has vowed to a return to the Black Stars.

“First of all, I am disappointed with myself. I should have worked hard maybe I will say that," he said after the final squad was named”.

“I will say big thanks to the coach and everyone for inviting me to the national team because we have a lot of players out there and I was able to make it to the 29. I am grateful and I am not going to give up”.

“I have to go home and work hard, maybe next time I will get a call up and I am not giving up. It's not over yet because I have to still fight and come back strong. I believe in myself that I will come back stronger”, the attacker said in an interview.

Ghana is set to continue their training tour in Dubai and they will face South Africa in a pre-AFCON friendly on June 15 before making their way to Egypt on June 20 for the AFCON tournament.