Kotoko vs Hearts of Oak: How to purchase e-ticket for Super Clash in Kumasi 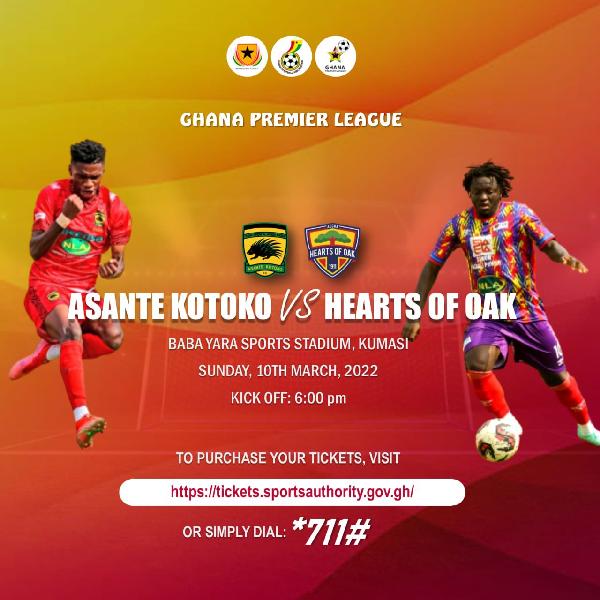 Asante Kotoko and Hearts of Oak will once again renew their rivalry in a Ghana Premier League matchday 24 fixture this weekend.

Kotoko will host Hearts of Oak on Sunday, April 10, 2022, at 18:00GMT at the Baba Yara Sports Stadium in Kumasi and will be seeking to avenge and President's Cup defeat to the latter.

The Porcupines in the first round held the Phobians to a goalless draw at the Accra Sports Stadium.

Ahead of Sunday's clash, Government, through the National Sports Authority, has launched a short code through which fans can purchase tickets for the game at the 40,000 capacity Baba Yara Stadium.

In a bid to avoid overcrowding at the gates, government has taken steps government overcrowding by instituting the e-ticketing platform to enable fans to purchase tickets before the game.

The shortcode allows fans to pay for the tickets using Mobile Money, after which a unique code will then be generated for the user, which they can present on the day of the game for access to the stadium.

You can as well use the link to purchase your ticket. https://tickets.sportsauthority.gov.gh

Meanwhile, the Referees Committee of the Ghana Football Association (GFA) has announced match officials for the Super Clash.