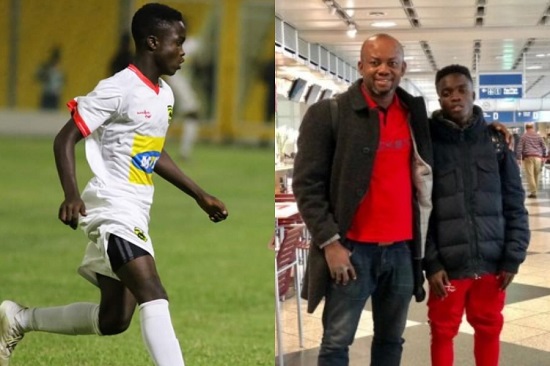 Samuel Anim Addo who is the agent of Mathew Anim Cudjoe says the ball is in Asante Kotoko's court if they wish to re-sign the teenager.

Mathew Anim Cudjoe, 16,  has returned to his parent club Young Apostles after the expiration of 6 months loan move with the Porcupines.

In an interview with Kumasi based Wontumi TV, when asked if the Anim Cudjoe will play for Kotoko again, the Ghana Football Association Executive Council member Samuel Anim Addo said in the interest of the boy, if he has to play for any team in Ghana then it will be the Porcupine Warriors.

He further indicated that it is Kotoko's chance to lose Cudjoe and it is their own chance to miss out on him if they so wish.

Anim Cudjoe who has attracted attention from several clubs in Europe due to the talent he posses his manager disclosed that despite the boy waiting for European contract they are still open for negotiations.

He added that the Porcupines know what the Cudjoe can bring on board and they are open for negotiations.

READ ALSO: Kotoko must be run like a business entity- Board member Martin Brobbey

Contrary to reports that if Mathew Cudjoe is to re-sign for Kotoko he will pen only a six months contract, the agent "it is not true".

The highly-rated youngster Mathew Cudjoe made his debut for Kotoko against Hearts of Oak at the Baba Yara Stadium in the 2019 President Cup where the Porcupines defeated the Phobians to lift the trophy.

He featured six times in the truncated Ghana premier league, scoring once which came against Ebusua Dwarfs at the Baba Yara Stadium.

Mathew Cudjoe was discovered during the maiden edition of the Baby Jet U-16 tournament which was organized by Ghana legend Asamoah Gyan in 2018.