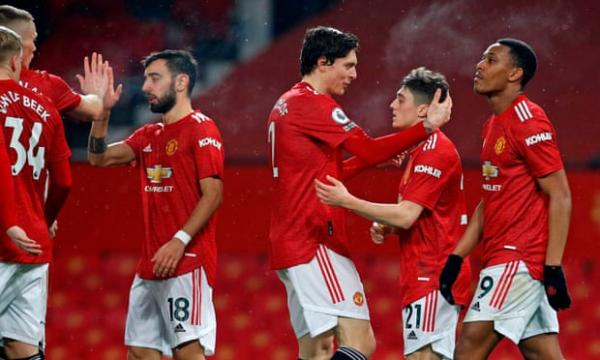 This was a message written in rampant style that Manchester United intend to remain serious title contenders. Southampton may have been injury-depleted and down to 10 men inside two minutes, but Ole Gunnar Solskjær’s side exhibited a killer edge that shows they mean business by equalling the biggest Premier League victory.

They ended with nine in a breathless finish that added three goals. First, Jan Bednarek was shown Southampton’s second red card by Mike Dean, who awarded a penalty for a foul on Anthony Martial. After VAR ordered the referee to the pitchside monitor he maintained his original decision and added the sending off. Bruno Fernandes scored from the spot, before Martial added an eighth, and Dan James the final strike.

If Bednarek’s red card had the whiff of farce about it – if anything Martial may have gone down easily – as Arsenal’s David Luiz was sent off earlier in the evening for a similar offence Dean perhaps felt he had no choice.

For Ralph Hassenhütl this is a second 9-0 trouncing his team has suffered in consecutive seasons, following the capitulation to Leicester in October 2019. Yet the German is right to differentiate between them because, as he posited, before this reverse Saints were enjoying a highly respectable campaign which has featured beating the champions, Liverpool.

What unfolded here, though, was a horror show. After only 79 seconds Alexandre Jankewitz scythed down Scott McTominay and Dean sent off the 19-year-old in what proved a nightmare first Premier League start for the Swiss teenager. McTominay, though, could resume and count himself lucky he was not more seriously hurt.

United proceeded to dominate, Solskjær’s men ruthlessly solving a puzzle they can find hard: the breaking down of banked resistance. They went close when McTominay fired in a cross that Fred nearly headed in and Mason Greenwood had a chance blocked.

Next came a sweetly simple opener. The rejuvenated Luke Shaw swung in the ball and there was Aaron Wan-Bissaka appearing from the right to fire home a second senior goal. Equally as fluid was when McTominay rolled a pass to Edinson Cavani and his cute backheel found Fernandes. The visitors scrambled clear but the question was for how long?

United were a blur of red, swamping Southampton in all areas. Shaw chipped in for Wan-Bissaka, this time he overhit, but United continued to hog possession. The effervescent Shaw showed once more and this time it was clinical: the left-back tapped to Greenwood who found Marcus Rashford and his first-time finish beat Alex McCarthy to his left. This had Hasenhüttl throwing his hands up in despair and while there was some respite when James Ward-Prowse’s free-kick warmed David de Gea’s hands it was brief.

First, a Fernandes shot forced a corner taken by the latter and, when play broke, the playmaker’s cross nearly had the scrambling Jack Stephens heading past McCarthy. Now, though, a dreaded own-goal did arrive: Ward-Prowse inadvertently tapped to Rashford and his fierce cross was turned home by the hapless Bednarek. A triumphant half for United closed with Shaw once more creating – this time via a pinpoint cross that Cavani headed home with aplomb. And, there was nearly a fifth when Kayne Ramsay brought down Cavani and Dean awarded a penalty before VAR ruled the challenge was marginally outside the area.

For the second half Cavani – due to an injury – and Shaw were replaced by Martial and Donny van de Beek. Now Fred took Shaw’s position, Van de Beek stepped in for Fred in midfield, and Martial for Cavani. The Frenchman had only two league goals to his name coming into this game so here was an opportunity to try and profit from United’s relentlessness.

Southampton were hoping to avoid a humiliating hiding that might approach the territory of last season’s 9-0 reverse to Leicester, in which they also had a player sent off early in the game. It was to prove beyond them.

They were rudely informed this was not their evening when Che Adams beat De Gea only for VAR to rule the striker offside – possibly by the much-derided armpit. United did not care: this remained a keep-ball exercise and with Everton the visitors on Saturday Solskjær could protect Rashford, replacing him with James on the hour. Martial was about to register his first – a sweet chest-down-and-volley high into the roof of the net in a much-needed confidence boost for him, before McTominay’s 20-yard zinger made it 6-0. This was all ahead of United’s final flurry and equalling a record they already jointly held with their 1995 humbling of Ipswich.