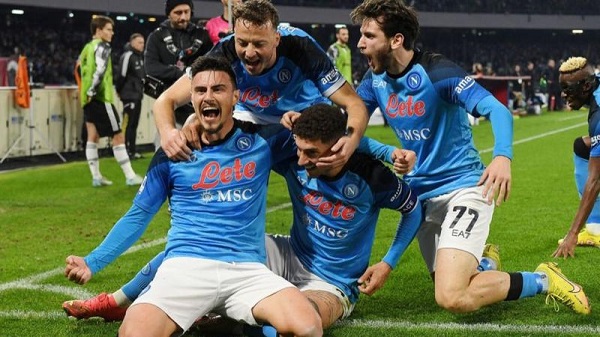 Napoli produced a sensational performance to thrash Juventus 5-1 and move 10 points clear in their bid for a first Serie A title since 1990.

Juventus had won eight games in a row without conceding but that record was ruthlessly ended at the Diego Armando Maradona Stadium.

Angel di Maria responded for Juventus, who slip to third as a result.

Osimhen opened the scoring for Napoli and then provided the pass for Kvaratskhelia to double their lead, but Di Maria hit back before the break.

Rrahmani restored the hosts' two-goal advantage 10 minutes after half-time and from there Luciano Spalletti's side were rampant.

Georgian star Kvaratskhelia picked out Osimhen with a superb cross and the Nigeria striker headed in his 12th Serie A goal of this season.

Elmas' deflected effort completed the scoring, as Juventus conceded five goals in a game in the competition for the first time since May 1993.

Massimiliano Allegri's side had only conceded seven in the top flight this season beforehand and sit third, level on points with second-placed AC Milan.

But this was a breathless Napoli display, one that underlines the hosts' credentials for a first Serie A title since Maradona was in their ranks 33 years ago.