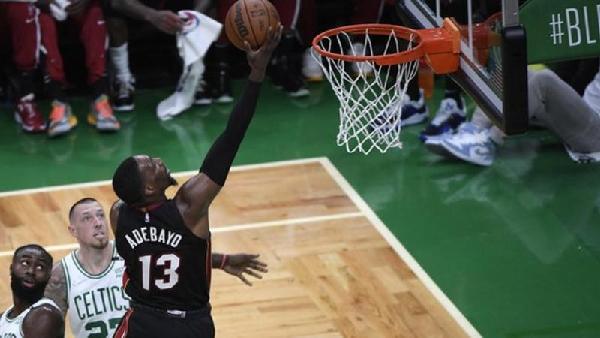 Bam Adebayo rose to the occasion for the Heat, who had to manage without Jimmy Butler for the second half
Shares

Bam Adebayo scored 31 points to help the Miami Heat beat the Boston Celtics 109-103 as his side took a 2-1 lead in the Eastern Conference playoff final.

Adebayo also managed 10 rebounds, six assists and four steals for his side.

The Celtics, who were 26 points behind at one stage, got to within a point at 93-92 behind late on but the Heat held on for a win on the road.

"I had to pick up my weight. These last couple games, my team was depending on me and I didn't show up," said Adebayo.

"I took it upon myself to lock in and get the win."

Adebayo top scored for his side and his star performance was needed by the Heat, who were without the influential Jimmy Butler for the second half because of a knee inflammation.

"He's a winning player," Heat coach Erik Spoelstra said of Adebayo. "He really is the heart and soul of our group. You can count on him all the time.

"He doesn't get caught up in all the noise. He's just out there competing and playing winning basketball, doing it on both ends."

The Celtics committed 23 turnovers which led to 33 points for the Heat, who had eight turnovers.

Star player Jayson Tatum could only manage 10 points for the home side, with Jaylen Brown top scoring for them with 40 points.

"Unacceptable. I've got to play better," said Tatum. "I feel like I left the guys hanging tonight. That's on me."

Boston coach Ime Udoka added: "We didn't match [their physicality] from the start.

"We got into complaining and let it take us out of our game. It's disappointing to come out that flat in a conference finals game."

Game four of the best-of-seven series is on Monday (01:30 BST Tuesday) in Boston.

In the Western Conference finals, the Golden States Warriors are 2-0 up against the Dallas Mavericks and play the third match of their series on Sunday (02:00 BST Monday).