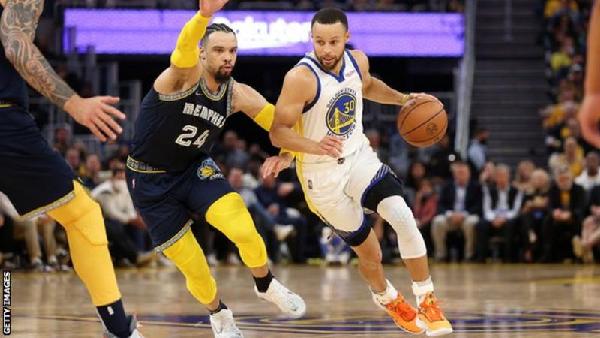 Stephen Curry's late scores helped the Golden State Warriors to a 101-98 win against the Memphis Grizzlies to extend their Western Conference semi-final play-off lead to 3-1.

Curry had a game-high 32 points and snatched victory with key free throws in the final minute to leave the Warriors one win away from the finals.

Despite playing without the injured Ja Morant, the Grizzlies established a 12-point lead early on in San Francisco and never fell behind until Curry's heroics in the last minute.

The Warriors travel to Memphis on Wednesday as they aim to reach a sixth finals in eight seasons.

Celtics overcame an 11-point deficit in the third quarter to tie their Eastern Conference semi-final series at 2-2 and will host Milwaukee on Wednesday.

Jayson Tatum also had 30 points for the Celtics as well as 13 rebounds, while Giannis Antetokounmpo's 34 points and 18 rebounds were not enough to secure victory for the Bucks.