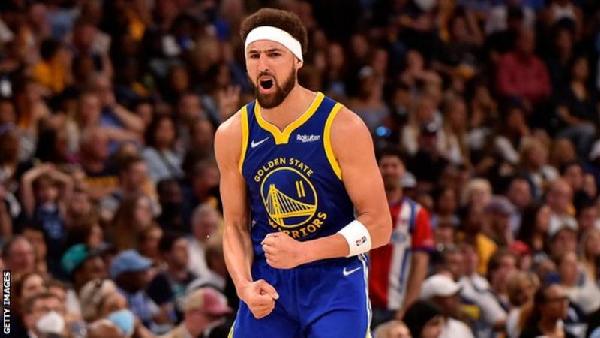 The Golden State Warriors took a 1-0 lead in their NBA play-off Western Conference semi-final with a thrilling 117-116 win over the Memphis Grizzlies.

Klay Thompson hit a three-pointer to put the Warriors ahead late on, only to then miss two free throws.

But Grizzlies guard Ja Morant could not convert a contested lay-up at the buzzer as the Warriors held on.

Giannis Antetokounmpo led the Milwaukee Bucks to a 101-89 Eastern Conference semi-final win over the Boston Celtics.

Antetokounmpo, twice the NBA's Most Valuable Player, recorded a triple double with 24 points, 13 rebounds and 12 assists for the defending champion Bucks as they took a 1-0 series lead in Boston.

The Warriors played the entire second half without key forward Draymond Green after he was ejected for a flagrant-two foul - the NBA rulebook's name for unnecessary and excessive contact - on Brandon Clarke shortly before half-time.

Jordan Poole starred for the visitors in Memphis by scoring 31 points, while Stephen Curry added 24.

Morant hit 34 points and Jaren Jackson Jr made 33 for the Grizzlies but Thompson, who made only six of 19 attempts, overcame a poor shooting performance to hit the ultimately decisive basket.