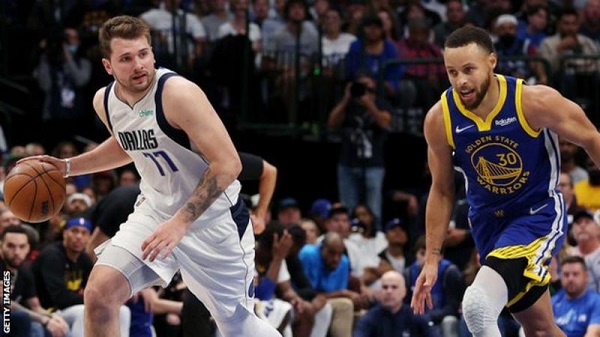 Luka Doncic scored 30 points as the Dallas Mavericks kept their hopes alive in the Western Conference playoffs by beating the Golden State Warriors.

The Mavs had trailed 3-0 but this 119-109 win means the best-of-seven series goes to a fifth game on Thursday.

No team in the NBA's 75-year history has come back from a 3-0 deficit to win a best-of-seven playoff series.

"We're going to stick together. It's going to be tough, we know that, but we have to stay together," Doncic said.

"Our defence was amazing today. That's how we've got to play, when we play like this we're a dangerous team," added the 23-year-old Slovenian, who finished with 14 rebounds and nine assists.

The fourth game in the series was delayed by 20 minutes at half-time because of a leaking roof that led to puddles gathering at one end of the Mavs' court.

The team were more efficient than their home court, their success built on a 19-2 scoring run during the second quarter.

"We believe it's just one game at a time, we did our part tonight and found a way to win," Dallas coach Jason Kidd said.

"The next part is to find a way to win on the road. We can't get ahead of ourselves.

"It's still 3-1 and Golden State is a tough place to play. But we've won there before. We just have to take care of the ball and make shots."

Golden State are seeking a seventh NBA Finals win while Dallas have had just once success, in 2011.