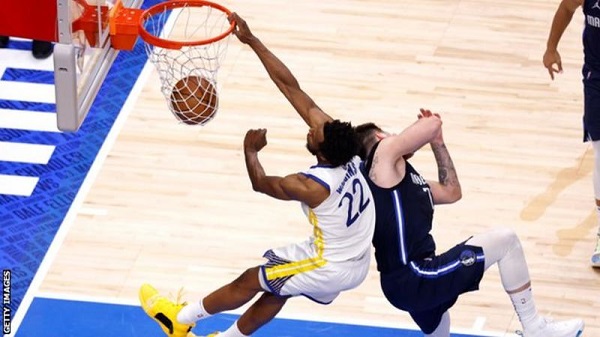 The Golden State Warriors are one win away from the NBA finals after beating the Dallas Mavericks 109-100 to go 3-0 up in the Western Conference play-off final.

Stephen Curry scored 32 points for the Warriors and Luka Doncic 40 for the Mavericks.

No team in NBA history has overturned a 3-0 deficit in the play-offs.

"This is probably our best stretch of the season," said Warriors coach Steve Kerr.

"We've got a lot of guys playing at a high level right now."

Game four of the series is in Dallas on Tuesday (02:00 BST on Wednesday).

Andrew Wiggins scored 27 points for the Warriors, who are bidding to reach the NBA finals for the sixth time in eight seasons.

They held a 48-47 lead at half-time but took control in the third quarter, with Curry scoring 11 points to help move the Warriors 78-68 ahead before holding off the Mavericks in the final quarter.

"When you're up 2-0 and you win on the road, it gives you a stranglehold and control of the series. That's huge," said Curry.

"We obviously know that the job's not done, but it's a good feeling to know that we can play with house money on Tuesday and try and get the job done."

The Mavericks went 2-0 and 3-2 down to the Phoenix Suns in the previous round of the play-offs before winning the best-of-seven series 4-3.

"It's not over yet, but it's not going to be easy," said Doncic. "The Warriors are not going to give you anything easy.

"Nobody had us being here in these Conference finals. But I think the Warriors are playing incredible."

In the Eastern Conference series, the Miami Heat lead the Boston Celtics 2-1 with game four in Boston on Monday (01:30 BST on Tuesday).