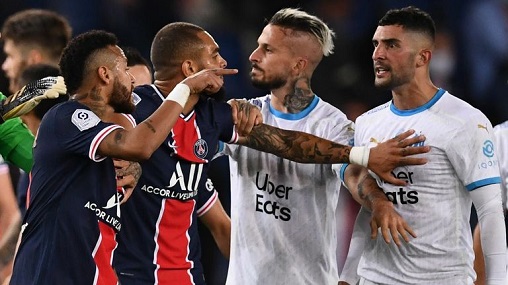 Neymar has been handed a two-game ban for his part in the mass brawl which overshadowed Paris Saint-Germain's clash with Marseille last weekend.

Players clashed late on in La Classique with five players sent off in the closing stages of the game.

The LFP Disciplinary Committee have now slapped PSG full-back Layvin Kurzawa with a six-game ban for his role after he kicked Jordan Amavi.

Amavi has been banned for three games with Marseille team-mate Dario Benedetto receiving a one-match ban.

Brazilian striker Neymar, meanwhile, has a two-match ban with a suspended sentence of an extra game with Leandro Paredes handed the same punishment.

Neymar appeared to throw a punch at Alvaro Gonzalez, who he claimed used racist language towards him.

Angel di Maria intervened as their situation escalated but he has now been summoned to appear before the LFP Disciplinary Committee having been accused of spitting at Gonzalez during the match.

The row is showing no signs of going away with Di Maria now caught up in the controversy which overshadowed PSG's 1-0 defeat.

Neymar claimed on social media that Gonzalez called him "a monkey motherf*****."

Gonzalez denied the claims in his own tweet, only for Neymar to tell the Spaniard that he was "not a man" for not admitting to his part in the row.

PSG this week released a strongly-worded statement backing their superstar Neymar after he reported being the subject of alleged racist comments.

"Paris Saint-Germain strongly supports Neymar Jr. who reported being subjected to racist abuse by an opposing player," said the club.

"The club restates that there is no place for racism in society, in football or in our lives and calls on everyone to speak out against all forms of racism throughout the world.

"For more than 15 years the club has been strongly committed to the fight against all forms of discrimination alongside its partners SOS Racisme, Licra and Sportitude.

"Paris Saint-Germain looks forward to the LFP's Disciplinary Commission to investigate and ascertain the facts, and the club remains at the LFP's disposal for any assistance required."