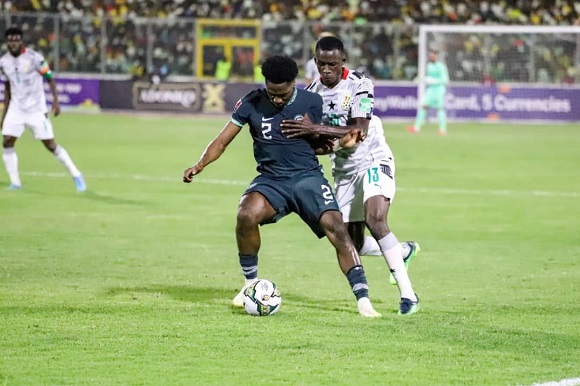 Nigeria host arch-rivals Black Stars in the second-leg of the 2022 World Cup playoff today, March 29 with the result deciding which side qualifies for the competition to be played in Qatar later this year.

The West African rivals face off at the Moshood Abiola National Stadium in Abuja in what is the decider between the two sides after the first-leg failed to produce a result.

The Black Stars were held to a goalless draw in Friday's match at the Baba Yara Sports Stadium in Kumasi which left the return encounter delicately poised.

Both sides had good chances of winning the game but the two goalkeepers Joojo Wallocot and Francis Uzoho of Ghana and Nigeria respectively, were on top form to prevent the opponent from breaking the deadlock.

Ghanaian youngsters Felix Afena-Gyan, Abdul Fatawu Issahaku and Mohammed Kudus were all denied by Uzoho's heroics, while Wallocot pulled off an astonishing save to deny Leicester City striker Kelechi Iheanacho.

Nigeria must win their match against Ghana in Abuja on Tuesday to be able to qualify for the World Cup which would be their fourth successive appearance at the global tournament.

The Super Eagles coach Augustine Eguavoen admits they must be at their best level to be able to defeat the Black Stars even though they would be playing at home.

"Ghana are not pushovers, they have a lot of talent. We will keep respecting them and I'm very sure the Ghana team will give us a lot of respect.

"We wanted to win the first leg but if we couldn't win I would have settled for a draw and that's exactly what happened. Our organisation was very good, we combined well in all the lines.

"But we didn't react quickly, so that's something we have to work on because we cannot allow the Ghanaian players freedom on the ball," Eguavoen added.

The Black Stars, on the other hand, need at least a scoring draw to be able to advance to the World Cup, completely transforming the recent fortunes of the Black Stars.

This follows their unimpressive showing at the TotalEnergies Africa Cup of Nations last month where they crashed out at the group stage without winning a match.

Since then, former international winger Otto Addo was appointed as the interim coach to take over from Milovan Rajevac who was sacked following the tournament in Cameroon.

Addo, who is part of the technical team of German side Borussia Dortmund, says the Black Stars want to win the match in Abuja instead of going for a draw.

"The result doesn't change anything. When we go there we want to win," Addo said.

"Even though our Africa Cup of Nations was not good this year, you saw we matched Nigeria in the first leg.

"They have high quality players but they've got respect for us and I thought the match in Kumasi was equal in terms of performance."

Ghana have no fitness concerns ahead of Tuesday's match as youngster Felix Afena-Gyan declared himself fit after being taken off in Friday's game with a thigh concern.

Nigeria have some injuries worries as midfielder Innocent Bonke picked up a hamstring injury during Friday the game speedy winger Samuel Chukwueze could be unavailable for the reverse fixture due to a muscular injury.