Nominees for NASCO Coach of the Month for April announced 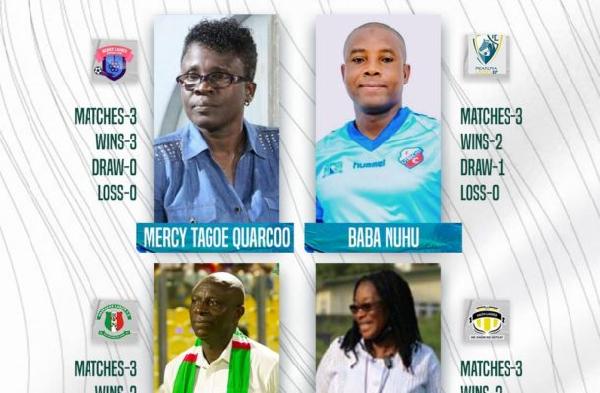 Four coaches who led their teams to impressive results in April have been nominated for the NASCO Coach of the month award for April.

Below are the nominees for the Coach of the month for April:

Out of the three games played in April, Coach Edna Quagraine guided her side to two wins and one defeat. The club which gained promotion into the league this season currently lies second in the Southern Zona league table with 27 points.

READ ALSO:  Annor Walker adjudged as NASCO Coach of the Month for February

The Hasaacas Ladies coach is in the race for a double following his team’s unbeaten record in the month of April, securing two wins and one draw. The team currently lies top of the Southern Zone league table with 40 points.

Berry Ladies were unbeaten in the period under review as they managed three wins out of three games under coach Mercy Tagoe. The team currently lie 6th in the Southern Zone League table with 20 points.

In April, Coach Baba Nuhu led Pearl Pia Ladies to two wins and one draw to take them to the second spot in the Northern Zone League log with 32 points – one point behind leaders Ampem Darkoa Ladies.

The winner of the Coach of the month goes home with a 43 inch NASCO Television set.