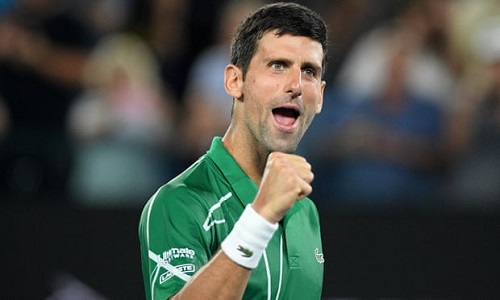 Novak Djokovic will attempt to retain his Australian Open title on Sunday after a straight-set semi-final win over injury-hit rival Roger Federer.

Federer went into the match as a big underdog after his struggles in reaching the last four and with concerns over the groin problem he picked up in his victory over Tennys Sandgren on Tuesday.

He appeared to have recovered well physically and took advantage of a shaky start from his opponent to move into a 5-2 lead but was unable to serve out the first set and ended up losing it 7-1 on a tie-break.

Federer headed straight off court for another medical timeout, this one apparently for treatment to his lower back, while Djokovic also consulted the doctor and took a pill. Federer reset well at the start of the second set but it was his serve under pressure.

He withstood that until the 10th game, when Djokovic forced a set point and took it 6-4 with a forehand flick, celebrating exuberantly as he moved to within one set of a record eighth grand slam final.

It now seemed a case of when not if Djokovic would clinch victory, and he broke the Federer serve again to lead 4-2 before serving out a 7-6 (1) 6-4 6-3 victory after two hours and 19 minutes.

Djokovic said: “It could have definitely gone a different way. He started really well and I was pretty nervous. I want to say respect to Roger for coming out tonight, he wasn’t at his best or even close to his best in terms of movement.”

The Parliamentary Press Corps are expected to meet today February 27, 2020,…