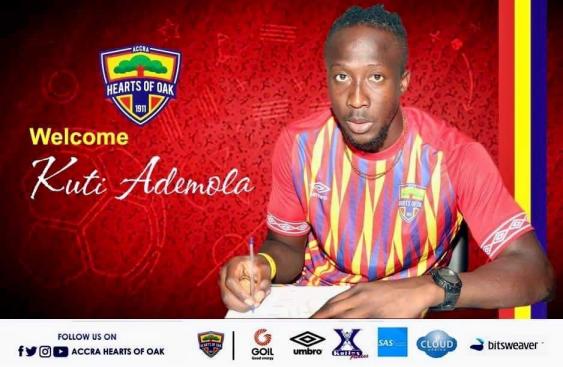 Nigerian striker KutiÂ Ademola has completed a move to Ghana Premier League club Hearts of Oak on a two-year deal.

The formerÂ Lobi Stars and Al Fujairah SC is officially the fourth player to seal a transfer to the Accra based club in the second transfer window.

A club statement on Tuesday afternoon read: Hearts of Oak is delighted to announce the signing of striker, Kuti Ademola. The lanky Nigerian professional has signed a two-year contract with the club.

In a related development, Hearts of Oak last week announced a partnership agreement with GTV Sports plus.

The Club announced to its teeming followers thatÂ they have sealed a partnership agreement with GTV Sports Plus owned by the state-owned Ghana Broadcasting Company (GBC).

According to Hearts of Oak, the state owned television will broadcast all exclusive contents of the Accra based club.

A statement read: Hearts Of Oak has signed a partnership agreement with @mygtvsports to air all our exclusive contents. Watch this space on when this program will first hit your screens on @mygtvsports