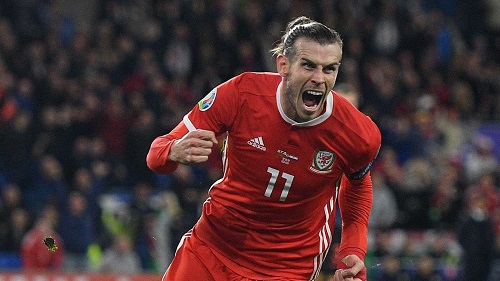 Real Madrid attacker Gareth Bale says that he finds it more exciting to play for Wales than for the Spanish giants.

Having already courted controversy in Spain this season due to his attitude, the 30-year-old has risked upsetting fans of the club further by indicating that he prefers featuring for his country.

Indeed, Bale has not featured for Los Blancos since sustaining a calf injury on international duty in October but has found his fitness in time to travel with Ryan Giggs’ side for a Euro 2020 qualifier against Azerbaijan on Saturday.

“I definitely have more excitement playing for Wales,” the former Tottenham star indicated.

“I've been with most of the older players since we were in the U17s. It's like playing with your mates down the park on a Sunday. It's normal.

“With Wales, I'm speaking my own language and feel more comfortable. But it doesn't change what I do on the pitch.

“I always give 100 per cent on the pitch wherever I am, that's what I always strive to do.”

Bale, meanwhile, rejects the criticism of the Spanish press, who have claimed that he is more interested in playing golf than turning out for Madrid.

“I find it hilarious to be honest, especially some of the pictures and stuff my friends send me,” he said.

“On one it said triple bogey - and I've never had a triple bogey! At least give me an albatross! It's funny.

“Some of the things I have seen, people don't understand and don't know what they're on about. So I just find it quite funny.”

Bale, who had been linked with a summer move to the Chinese Super League, has featured only seven times for Madrid this season, scoring two goals and creating two more.

He has won 79 caps for Wales, scoring 32 goals, and will hope to add to both of those tallies as Giggs’ men chase Euro 2020 qualification over the coming week. They need, however, to beat both Azerbaijan and Hungary, and hope that Slovakia drop points against Croatia or Azerbaijan.