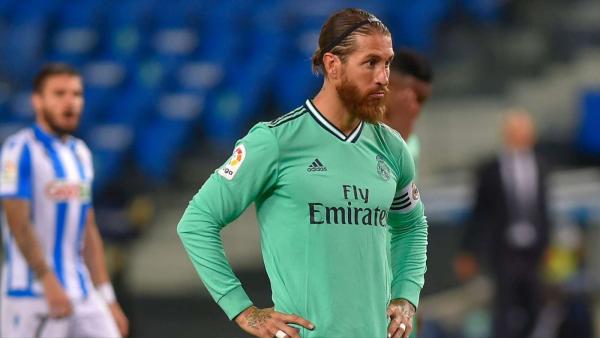 Sergio Ramos’ effort to put Real Madrid 1-0 up away to Real Sociedad on Sunday was a historic strike as it pushed the centre-back to the top of La Liga’s all-time scoring charts for defenders.

Ramos, who converted from the penalty spot to break a scoreless stalemate at Anoeta, overtook former Barcelona man Ronald Koeman with the effort, taking him to 68 goals in his top-flight career.

The 34-year-old’s joy, however, proved to be short lived as he was forced off with a knee injury in the aftermath, following a challenge to deny the home side a scoring chance. He was later caught by television cameras with his knee heavily strapped and iced in the stands as he limped to his seat.

A Spain legend, having won both the European Championships (twice) and the World Cup with the national side, he began his professional career with Sevilla in 2004, scoring two goals in 39 top-flight outings with the Andalusian club.

He moved to Real Madrid in 2005 and has remained at Santiago Bernabeu ever since, playing a key role in the club winning four La Liga titles and the Champions League on as many occasions.

While his combativity has been one of his main assets throughout his career, he has also caught the eye with his ability to find the net, doing so nearly 100 times for the club.

His first La Liga goal for Los Blancos arrived back in 2005, when he scored away to Malaga in a 2-0 victory, but he had to wait until a 4-0 win over Deportivo La Coruna in 2006 before grabbing his first goal at Santiago Bernabeu.

He is currently in his most joint most prolific campaign in La Liga, having netted his seventh of the season against Sociedad. All of these goals have come since October, although he has been boosted by taking over penalty duties since the sale of Cristiano Ronaldo to Juventus in the summer of 2018.

His kick against Sociedad was the fourth time he had netted from the spot in La Liga this term (plus one more in the Champions League), while he has only ever missed one of 17 he has taken for the club.