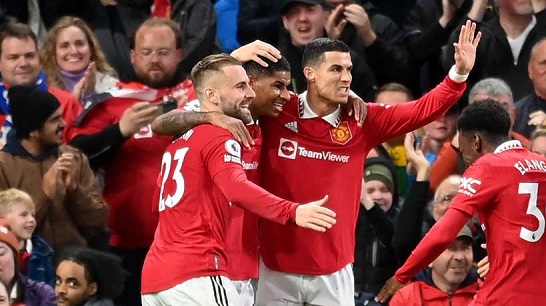 Marcus Rashford’s 100th goal for Manchester United proved to be enough for Erik ten Hag’s side at Old Trafford as they moved up to fifth in the Premier League with a narrow 1-0 victory over West Ham.

Antony failed to make United’s matchday squad due to injury, but Cristiano Ronaldo was restored into the starting line-up, and early on the hosts showed their attacking intent. West Ham’s game plan was to try and hit the home side on the counter attack.

It was Manchester United though that took the lead shortly before the break, as Rashford met Christian Eriksen’s teasing cross from the right with a bullet header that flew past Lukasz Fabianski in the West Ham goal. The strike brought up his century for the club on his 318th appearance.

With time running out, West Ham tried everything to search for a valuable equaliser and the home side had to rely on David de Gea to keep the scores level as the Spaniard made a superb save from Kurt Zouma’s header to keep his side ahead.
United then came close to adding a second in the 86th minute as Fred’s header from Scott McTominay's cross came back off the far post.

De Gea was called into action once again in the third minute of stoppage time, as he made a diving save to stop Declan Rice's long-range strike from finding the top corner. Seconds later, the final whistle sounded and Ten Hag’s side managed to hold on to secure another important home win.