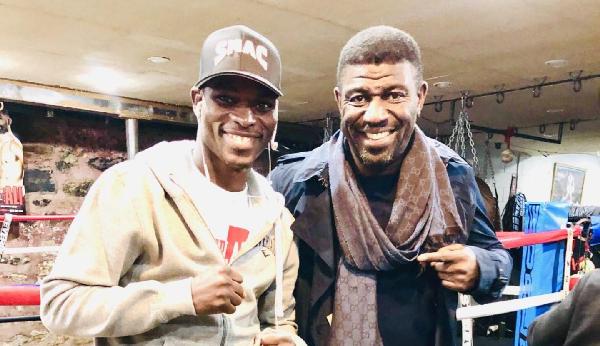 Streetwise Management, managers of Richard Commey, has hit back at the Ghana Boxing Authority (GBA), stating that no one had the right to deny their boxer his Ghanaian roots.

According to Michael Amoo-Bediako, manager and CEO of Streetwise Management, Commey would fight for the Ghanaian flag on Saturday, August 27 when he takes on Jose Pedraza in a super lightweight contest in Oklahoma.

Amoo-Bediako was responding to an interview granted by Mohammed Amin Lamptey to Accra-based Happy FM, where the Communications Director of the GBA was quoted to have said that Commey cannot fight under the Ghana flag against Pedraza due to his suspension by the local boxing body.

Lamptey said Commey refused to pay his percentage to the GBA for fighting abroad in spite of a clause in the GBA statutes to that effect.

He added that the former IBF lightweight champion disrespected the entire leadership of the GBA when the body demanded for the said percentage from his fight with Vasyl Lomachenko in the US last December.

“There are certain incentives boxers pay to the GBA after bouts they engage in abroad. The current GBA president, Abraham Kotei Neequaye, realised that most of these old boxers do not pay the incentives required,” said Lamptey.

“These incentives are used to build and strengthen our boxing infrastructure at the grassroots and also help upcoming boxers. This, however, has been captured in our constitution,” he explained.

But in his response, Amoo-Bediako also explained that Commey’s achievements while representing Ghana and Ghanaian boxing had been recognised all over the world and was held in high regard.

“Richard Commey is a Ghanaian, always has been and always will be. His achievements from representing Ghana and Ghanaian boxing have been recognised all over the world and is held in very high regard amongst the boxing fraternity,” he said.

“Once again ‘RC’ (Commey) will be headlining an event which will be broadcast by ESPN and shown live from coast to coast across United States of America. Skysports will be broadcasting the event live across the UK and this shows the popularity of Richard that he continues to be a headline act.

“Top Rank Boxing, DiBella Ent and Streetwise Management are proud to be associated with Richard Commey and, once again, he will show on Saturday night the fighting spirit of being a Ghanaian,” he stated.