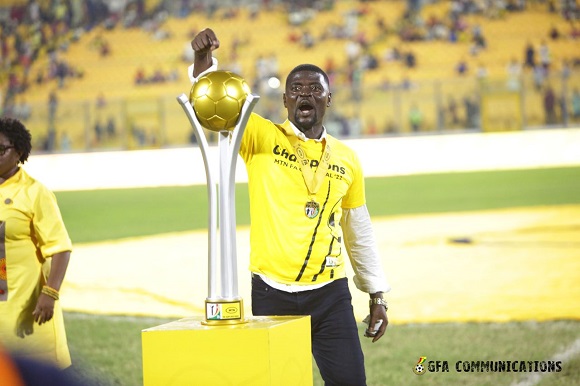 Hearts of Oak head coach Samuel Boadu is not a happy man despite winning despite defending the MTN FA Cup trophy.

The gaffer said he failed this season as he couldn't propel the club to a top 4 finish in the just-ended 2021/22 Ghana Premier League.

Hearts of Oak struggled to get their season going as they placed 6th at the end of the campaign, however they managed to appease their fans with FA Cup glory on Sunday.

Speaking after the triumph, Coach Samuel Boadu admits he failed this season.

“Hearts of Oak is a big club and we can’t end the season without a trophy, but as a coach not being in the top four I feel I have failed. People should know this as well, with Coach Boadu there’s always a trophy to win,” Coach Samuel Boadu said.

Hearts Of Oak have defended their MTN FA Cup title after beating Bechem United at the Baba Yara Stadium on Sunday evening.

The Phobians beat the Hunters 2-1 to win the MTN FA Cup for a record twelfth time.

The win did not come easy as they had to fight back from a goal down to win the contest.

The Phobians quickly organized themselves and Caleb Amankwah drew the equalizer with a spectacular kick before half time.

Samuel Boadu's side after the recess for the first in the game went in front courtesy Daniel Afriyie's goal.

Hearts of Oak held unto the lead till the referee brought proceedings to an end at the Baba Yara Stadium. The win means Hearts of Oak have picked up the only slot for the 2022/23 CAF Confederation Cup.