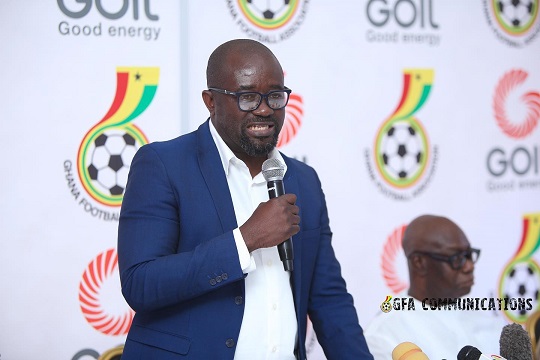 President Kurt Okraku has appealed to corporate entities to spread their resources across clubs to make them financially and economically viable.

He made the remarks during the announcement of the sponsorship package with Ghana Oil Company (GOIL) in Accra on Wednesday, November 2, 2022.

The indigenous oil and gas company has reached an agreement with the Ghana Football Association worth Two Hundred Thousand dollars as official fuel partner for a period of two years.

The deal with the GFA is expected to benefit clubs across the football ecosystem including Asante Kotoko and Accra Hearts of Oak who already have contracts with the company.

President Kurt Okraku believes there is no better platform to leverage any entity like the football platform. ‘’We are grateful for this partnership and commitment to domestic football by investing in Hearts of Oak and Asante Kotoko’’ he said. ‘’Even though we would like you to sponsor every club in this country, when Hearts of Oak and Kotoko have money, other teams have money as well because we will develop the players and they will come and buy’’.

‘’But when you have more resources, spread it across to all the clubs because there is no better platform to leverage any entity like the football platform’’.

‘’Football is the only sport that is consumed in over 211 countries worldwide. In Ghana, the football vehicle is the strongest vehicle you can think of, stronger and much accepted than politics. Because football is a unifier regardless of political affiliation and football brings all of us together’’.

‘’On the 24th of November when the Black Stars walk out of the tunnel, the entire nation will be up in support of the team. Unity is what football brings so you’ll never get it wrong when you invest in such a product and we believe that this relationship will grow and impact on lives beyond our generation’’ he added.