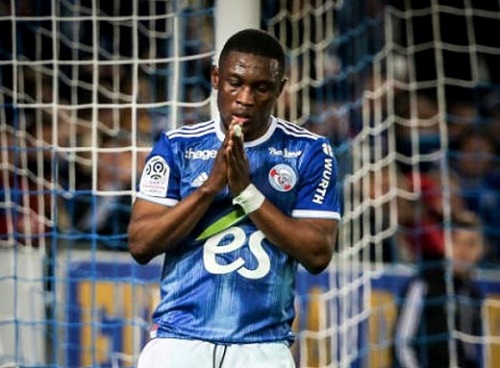 Abdul Majeed Waris has revealed his thoughts on the Ligue 1 season being ended, as the Strasbourg forward expressed that the decision to end the season may have been made too early.

Last month, the French government announced that football would be banned until September due to the threat of the coronavirus, which has taken over 26,000 lives in the country.

The decision meant that Paris Saint Germain were crowned champions, having held a 12-point lead before play was brought to a close, while Amiens and Toulouse were relegated from the top flight.

It was a momentous call given that other European leagues are pressing on with plans to ensure that their season gets underway and the Bundesliga have announced that will make a return on May 16.

And Majeed Waris, whose Strasbourg side sat in tenth place, feels that the decision to end Ligue 1 may have been taken prematurely.

“I think it’s good to cancel the league but maybe it’s too early to have given the championship up. They can suspend it, and then maybe when we have a solution then we can play the remaining games and then continue into the new season.

“Because if you look at some of the big clubs, they play every three days. When there is progress in terms of the virus, then we can play the remaining games and then start a new season straight away because I think we would be fit to go.”

Waris featured seven times and got two goals for Strasbourg in the just-ended season.