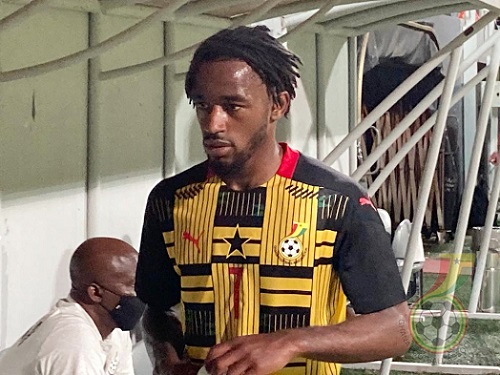 Tariqe Fosu is over the moon after scoring his first international goal for the Black Stars in Monday’s friendly against Qatar.

The 24-year-old opened the scoring on Monday, 12 October 2020, as the Black Stars thump Asian champions Qatar 5-1 in an international friendly.

He was making his second appearance for the four-time African champions after debuting last Friday in the 3-1 defeat to Mali- also in a friendly.

Speaking after the Qatar game, Tariqe Fosu is proud Ghana recovered from Mali's defeat to maul Qatar. He expressed excitement after scoring his maiden goal for Ghana.

"I am proud and happy that we got the result today because the other day, I made my debut but it wasn’t a good result, and I wanted to make sure that we put things right today. I played in my natural position today so I was allowed to express and show what I can do so I’m just happy that we got the result today and I hope all the fans are happy with it."

"I think if you compare the first game, there were a lot of new players so I think we needed time to jell and to work with tactically and I think over the weekend we worked on some things with the gaffer and we did it really well and I think in the first half, especially, even though they had one chance and scored but I think we were very compact, and we didn’t give them any space and I think that was perfect and obviously quality showed the end, good result."

The Black Stars walloped the Asian Champions 5-1, a result that saw CK Akonnor record his first win since his appointment.

The team put a good second-half performance to record the heavy victory following a 1-1 draw in the first half.