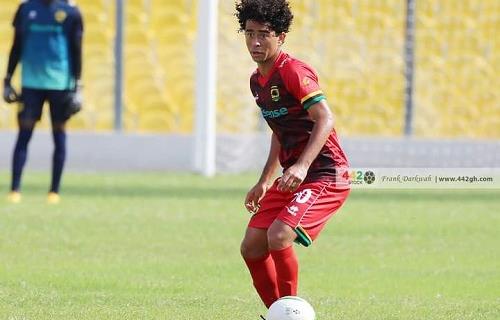 Ebusua Dwarfs coach Ernest Thompson says he mapped out a strategy for Asante Kotoko's attacking midfielder Fabio Gama that made it difficult for the Brazilian to have an influence in Wednesday's game.

The Brazilian did not have a major influence in the game as he has previously done despite the Porcupines 1-0 win over Dwarfs.

He failed to score his first goal in the Ghana Premier LeagueÂ when his header in the 35thÂ minute missed the target by inches.

He was substituted in the 67th minute by Naby Keita.

Speaking on his opponent's player after the encounter in which his outfit lost by a lone goal to the Porcupines courtesy Christopher Nettey's 71st-minute header, Ernest Thompson, said he walked the talk on the Brazilian.

â€œThe kitchen was too hot for Gama and you saw it. That is why he was taken off. I said it before the game and am justified," he said.

â€œBefore the game I said that we were going to neutralize some of their players and you can see that Kwame Poku was a passenger in the game.

â€œI am very proud of my boys. They performed well but we lost at the end. But I am happy with the performanceâ€ he added.

In the lead to yesterday's game, Dwarfs coach, Ernest Thompson stated his unhappiness with which the mediaÂ has dedicated time to talking about the performance of Fabio Gama.

â€œI have seen Fabio Gama and he is just a normal player like any other Ghanaian player. I think we even have better players than Fabio Gama. Letâ€™s not hype him because he is a Brazilian. Letâ€™s promote our own because some of them are better than Gamaâ€, he said in a pre-match presser.

â€œHe is doing well and Iâ€™m not saying he is a bad player but you canâ€™t say that he is better than every player in Ghana. He is an ordinary player so stop hyping him. He is playing well but not worth the hypeâ€.