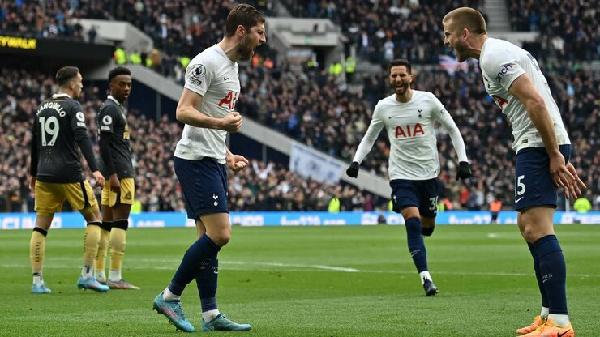 Tottenham Hotspur completed a quick-fire turnaround to beat Newcastle United 5-1 after falling behind to a Fabian Schär free-kick.

The win takes ‘Spurs’ into the Champions League qualification spots on goal difference to put pressure on fierce rivals Arsenal.

After a run of nine unbeaten in the Premier League, you can forgive the ‘Magpies’ for an inch of complacency that has seen them lose the last two to late winners.

READ ALSO: West Ham up to fifth with win over Everton

Despite that, they still sat nine points above the relegation zone ahead of kick-off, facing a ‘Spurs’ side who have won four of their last five.

Star marksman Harry Kane has seven goals in his last seven league games, but uncharacteristically screwed an early effort wide after good work down the left.

In an entertaining affair, unknown set-piece specialist Schär fired Newcastle into a deserved lead five minutes before HT. The centre-back’s free-kick 20 yards out was hit low and hard to Hugo Lloris’s left, and was one he should have kept out.

The lead proved fragile and lasted all of two minutes as Spurs piled men forward for a corner. The first phase was cleared, but Son Heung-min’s second ball was perfectly flighted onto the head of Ben Davies, who glanced home for his first of the season. Attackers providing for defenders seemed to be a theme which continued early in the second half.

Kane picked up the ball wide on the right and curled a defence-splitting ball in behind the ‘Magpies’ back line that was missed by Son, but headed home by Matt Doherty at the back post.

The wheels fell off for Newcastle, who went further behind six minutes later, as they left glaring holes at the back in search of an equaliser. Tottenham's clinical front three combined as Dejan Kulusevski was played in behind down the right by Kane, feeding Son who took a touch before firing beyond Martin Dúbravka. Emerson Royal then got in on the act, taking up the centre forward space to score his first for ‘Spurs’ after a strong run from Doherty down the left.

Substitute Steven Bergwijn completed the rout, finishing well after being played through by Lucas Moura to cap off a clinical victory.

The ‘Magpies’ suffered defeat for the first time in four occasions at the Tottenham Hotspur Stadium. Eddie Howe’s sides have now lost six in a row away at ‘Spurs’, with an aggregate score of 21-3.