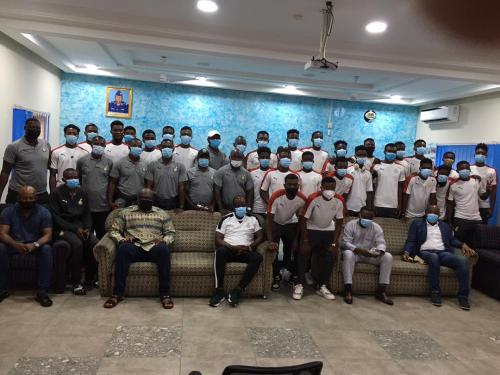 The Minister-designate for Youth & Sports Honourable Mustapha Ussif sent a goodwill message to the Black Satellites before the team departed for Mauritania for the CAF U-20 African Cup of Nations (U-20 AFCON).

The Ghanaian contingent made up of 26 players, technical teams and officials left Accra on Saturday morning to Nouadhibou where they will be based for the tournament.

In a brief message to the team which was delivered, Hon Ussif urged the players to put up their best performance and make the entire nation proud.

Though he is yet to go through vetting and parliamentary approval, the Minister-designate assured the team of government’s support and his personal commitment to ensure that the team will repeat their impressive performance in the WAFU tournament.

GFA President Kurt ES Okraku who was at the Airforce base to see the team off also reminded the team that the entire country is behind them and called on them to make the nation proud during the competition.

“You are not only representing Ghana but also West Africa because you are the champions of the Wafu competition.”

“Put in your best efforts and let’s win this competition and I can assure you that your efforts will be rewarded by the country”, the GFA President stated in a brief meeting with the team on Saturday.

Ghana will take on Tanzania in their opening match on Tuesday, February 16 and will face Morocco on Friday, February 19 before the final group match against Gambia on Monday, February 22.