U-23 AFCON: Habib Mohammed's goal salvages a draw for Black Meteors against Cameroon 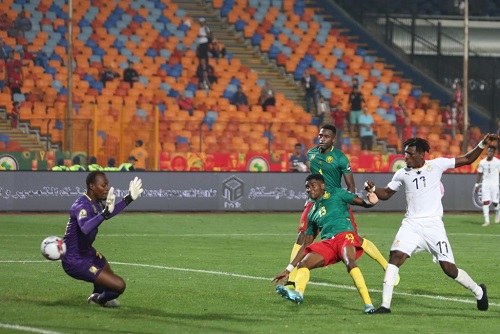 Habib Mohammed scored a late goal to salvage a draw for the Black Meteors in their opening Group A match in the U-23 AFCON against Cameroon which ended 1-1 at the Cairo International Stadium.

Bayern Munich teenage sensation Frank Evina opened the scoring with a beautiful free-kick on the hour mark after Habib Mohammed had committed a foul right at the edge of the box.

The Asante Kotoko defender redeemed himself by fetching the equalizer with three minutes left.

Following a lackluster display from both sides in the first half, the Cameroonians opened the scoring on the hour mark through Bayern Munich forward Frank Evina.

The 19-year old brilliantly curled in a beautiful freekick just at the edge of the box leaving goalkeeper Kwame Baah helpless.

Cameroon were close to grabbing a second but a solid defending from Edward Sarpong saw Ayuk's effort in a good position go way wide.

Kwabena Owusu, who took the armband from Yeboah had himself booked after bumping into a Cameroonian defender on the floor.

Minutes later Habib Mohammed pulled level after a pass from the middle deflected to his path in the box and like a fox he poked the ball into the net with four minutes left.

The Cameroonians were pushing for another goal but a last minute effort blasted wide saw the two sides share the spoils.