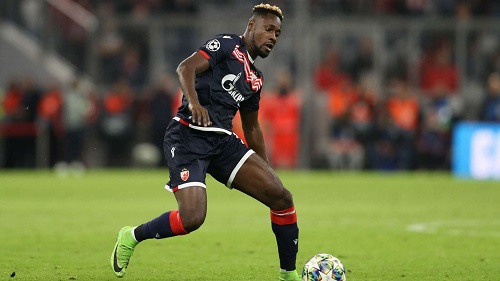 Richmond Boakye Yiadom says he hopes to be on the scoresheet for Redstar Belgrade in tonight clash against Bayern Munich.

Boakye-Yiadom's Redstar Belgrade welcome the German giants to the Stadion Rajko Mitić in their penultimate game in the UEFA Champions League.

The Serbian side lost their last home match against Tottenham by five goals to nil which makes their qualification to the next run a mountain challenge. They lie 3rd on the table with 3 points and will need to record a win to boost their round 16 qualification hopes.

Bayern Munich meanwhile have dominated and won all four of their group stage matches including a 7-2 win away to Tottenham Hotspurs.

However, the Black Stars striker says his outfit are on a mission to appease their fans following the humiliation against Tottenham a few weeks ago.

"When you watch their away performance against Tottenham Hotspur it easy to conclude that they will give us a beaten tonight, but we're going to give all," the 26-year-old.

"We could have done better at home against Tottenham and we hope to give our fans something to cheer about today against Bayern. I pray to get on the score-sheet tonight."