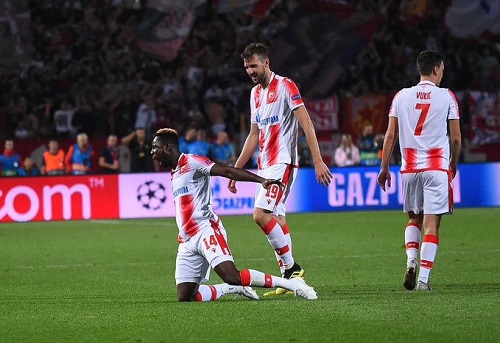 The Black Stars forward aided Red Star Belgrade to record their maiden win in the UEFA Champions League with a 3-1 victory over Olympiacos. He climbed off the bench to score the 90th-minute goal that sealed the victory for Belgrade.

Speaking after the game, an excited Boakye-Yiadom expressed gratitude to his teammates and God for the goal as well as the team’s victory.

‘I’m happy and I thank God for giving me the first goal in the Champions League. Its amazing and great feeling to head the ball and watch it enter the net. All credit goes to the almighty God.

Without him, there is no Boakye-Yiadom so I’m really grateful. I also want to thank Ghanaians for their prayers”, he said.

Red Star Belgrade started brightly at the Rajko Mitić Stadium as they welcomed Champions League football back to Belgrade.

They got thrashed on their opening game against Bayern Munich by 3-0 and Tuesday's game served as the perfect opportunity for them to record their first time.

Olympiacos took the lead after Ruben Semedo squeezed a ball in at the far post from a narrow-angle. They, however, had to play the majority of the game with 10-men after Yassine Benzia got sent off minutes after picking up his second booking of the night.

Vladan Milojević's side took full advantage of the difference in numbers and scored twice through Milos Vulic and Nemanja Milunović to put the Serbian club ahead before Ghana forward Richmond Boakye scored the 90th-minute goal to make it 3-1 for the Red and Whites.