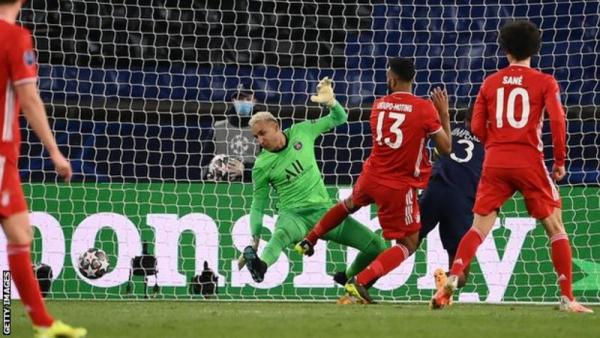 Paris St-Germain were beaten on the night but held on to claim an away-goals victory over holders Bayern Munich that takes them through to the last four of the Champions League.

In a fascinating second leg between the sides that contested last year's final, PSG were threatening on the break, testing visiting goalkeeper Manuel Neuer a number of times and twice hitting the woodwork through Neymar.

It was Bayern, though, who broke the deadlock, giving themselves hope of a comeback win as Eric Maxim Choupo-Moting rose highest to follow-up David Alaba's saved shot with a close-range header.

Missing the injured Robert Lewandowski, the German side lacked their usual ruthlessness up front and were unable to find the second goal that would have continued their trophy defence.

Kylian Mbappe thought he had sealed the tie with just over 10 minutes to go, but after breaking clear and firing in the assistant's flag ruled his effort out.

PSG will face either Borussia Dortmund or Manchester City in the semi-finals, with the latter holding a 2-1 advantage going into Wednesday's second leg in Germany.

Elsewhere, Chelsea survived a spectacular late overhead kick from Mehdi Taremi to overcome Porto and confirm a place in the Champions League semi-finals for the first time in seven years.

Thomas Tuchel's side went into this 'home' last-eight second leg - with both games being played in Seville during the current Covid-19 pandemic - protecting a two-goal lead they only briefly threatened to surrender in the dying seconds following Taremi's brilliant finish.

Chelsea, who will now face either Liverpool or Real Madrid in the semi-final, played within themselves but it was enough to keep a disappointing Porto at bay, the Portuguese side rarely testing keeper Edouard Mendy with their surprisingly cautious approach, which they only cast aside when it was too late.

Mendy's poor clearance almost offered Corona a first-half chance but he could not take advantage, while Christian Pulisic and Mason Mount had opportunities after the break.

Taremi's goal was out of character with the rest of Porto's performance and came too late to alter the inevitable course of this quarter-final.