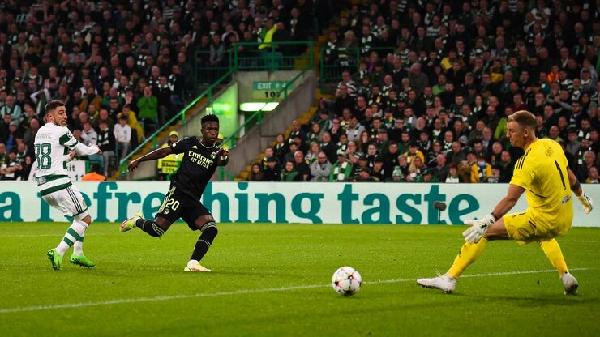 Real Madrid survived a brilliant first-half performance from Celtic and an electric atmosphere in Glasgow, to open their UEFA Champions League (UCL) campaign with a 3-0 victory, matching the scoreline from the last H2H ten years ago.

There were goosebumps aplenty, as the UCL’s famous official theme played ahead of a group stage match at Celtic Park for the first time since December 2017. A deafening roar greeted the first whistle, and Liel Abada could have blown the roof off when he struck as part of the Bhoys’ blitz in the opening minute, but his effort was deflected behind. Staying industrious in the early skirmishes, the Israel international had an even better opportunity just before the quarter-hour mark, when Jota picked him out with an outstanding pass, but he hit a tame shot straight at Thibaut Courtois.

Celtic were filled with belief as they remained on top, with Reo Hatate hitting a venomous strike that was saved before Callum McGregor’s attempt struck the post. There was a scare for the hosts shortly before the half-hour mark though, as Federico Valverde found space on the edge of Celtic’s box but fired wide. Real Madrid talisman Karim Benzema then limped off, and his replacement Eden Hazard could only send an unconvincing attempt dribbling harmlessly wide for his first effort, before Vinícius Júnior was impressively denied by Joe Hart.

Josip Juranović’s fizzed cross gave HT substitute Daizen Maeda the opportunity to make an immediate impact shortly after the restart, but he couldn’t get a clean connection with his attempt. Enough was enough for Los Blancos from that moment on, and they showed why they are kings of Europe by springing a devastating attack, which culminated in Vinícius ruthlessly finishing Valverde’s cross in the 56th minute. Capitalising on Celtic’s stunned state of mind, the visitors then doubled their lead just four minutes later, as Luka Modrić beat Hart with the outside of his boot.

There was no way back for the Glaswegians, and a third Real goal arrived 15 minutes from time, when Toni Kroos found Dani Carvajal, who teed up Hazard to execute and seal the Spanish giants' third straight three-goal haul in UCL away action. Ultimately strolling to victory, Los Blancos maintained their perfect record in all competitions this term, while also recording just a second victory from seven prior visits to the British Isles since October 2014.