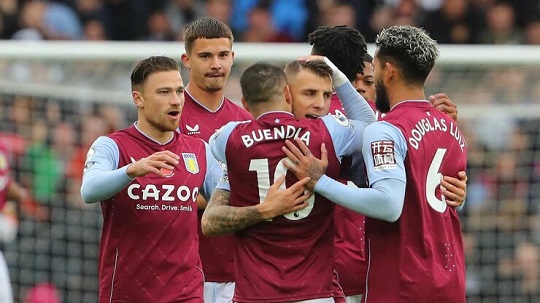 Aston Villa sealed their first win over Manchester United at home since 1999 with a 3-1 victory in Unai Emery's first game in charge.

Eric ten Hag, who started Donny van de Beek and Alejandro Garnacho and made Cristiano Ronaldo captain, saw his side start sloppily and fall 2-0 behind after 11 minutes.

Leon Bailey scored the opener after using his pace to burst into the box and fire the ball past David De Gea.

READ ALSO: Arsenal win at Chelsea to return to top of table

The hosts were then in dreamland after Lucas Digne curled in a free-kick from around 25 yards into the corner.
United eventually found some rhythm with Ronaldo and Garnacho on his Premier League debut forcing Emiliano Martinez into good saves.

And they reduced the deficit on the stroke of half-time when Luke Shaw's wayward shot took a huge deflection off Jacob Ramsey and wrongfooted Martinez.

The second half was a similar story, with the home side starting brightly.

And Villa made it 3-1 after Ollie Watkins cut the ball back to Ramsey who hammered his shot into the roof of the net.
Ten Hag surprisingly waited until the 64th minute to make substitutions, bringing on Tyrell Malacia, Anthony Martial and Anthony Elanga.

But the changes did little to spark an impact and Villa comfortably held on for a win which sees them climb to 14th while United stay fifth.