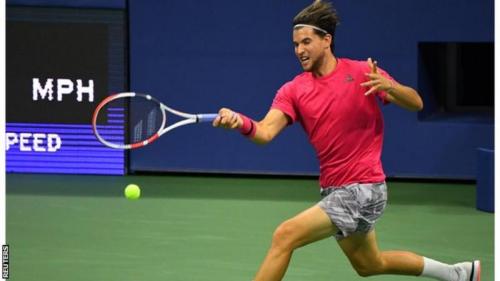 Austrian Dominic Thiem will face German Alexander Zverev in Sunday's US Open men's final after overcoming Russia's Daniil Medvedev in a semi-final of high quality at the Arthur Ashe Stadium.

It was a match that saw Thiem benefit from a disputed decision in the first set then twice break back as the third seed served to take sets two and three.

Both he and Zverev are looking to win their first Grand Slam singles title.

A relieved Thiem said: "It was definitely anything other than a routine three-set win.

"The first set I got a bit lucky with this strange situation [Medvedev's failed challenge].

"After that it was great tennis from both of us and I could easily have been two sets to one down, he served for the sets in both sets."

The first set turned on a contentious decision in the sixth game as Medvedev was serving. The 24-year-old looked to challenge late on a point after play continued despite his first serve being long - the Russian's request was not acknowledged by the umpire.

The third seed then was given a code violation for walking around to the other side of the net to highlight where his serve had landed. He voiced his frustrations at the umpire and an official, stating, "US Open is a joke... sorry I think I killed someone."

The Russian, the runner-up last year, lost the game and was then broken again at 5-2 as Thiem took the opening set.

The Austrian seemed in total control but, almost inexplicably, his level dropped at the start of the second set allowing Medvedev to gain a valuable early break. However, the now four-time Grand Slam finalist regained his confidence and broke back with his opponent serving for the set, before the Austrian held his nerve to hold serve following a nine-minute 11th game.

The players were near inseparable in the subsequent tie-break until Thiem produced a forehand winner at 8-7 which was too good for his opponent.

A medical time out to resolve an issue with his foot appeared to again disrupt his rhythm at the start of the third set as he suffered another early break. But the two-time French Open finalist showed his mettle once more by breaking back when the Russian tried to serve for the set.

It was a second wind that came at the right time for Thiem, who edged out Medvedev in another tight tie-break to reach his first US Open final.

On facing Zverev, who he has beaten seven out of nine encounters, he added: "I'm really looking forward to that. We have such a great friendship and rivalry - it is really amazing that we face each other in a Slam final."