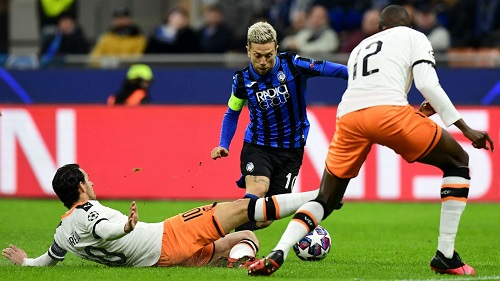 Valencia'sÂ Champions LeagueÂ encounter withÂ AtalantaÂ will be played behind closed doors due to fears over the coronavirus outbreak.

Los Ches will have to make do without the support from their fans when they attempt to overturn a 4-1 aggregate scoreline in the second leg of their last-16 tie on March 10.

Spain's Health Minister, Salvador Illa, has recommended that all sporting events that include teams from zones designated as high-risk for coronavirus, such as northernÂ Italy, should be held in empty stadiums.

UEFA have released an official statement confirming the news, which reads: "In view of the recent decision issued by theÂ Conselleria de Sanidad de la Comunidad Valenciana (Ministry of Health of Valencia) and the statement from the Spanish Federation, UEFA confirms that the Valencia-Atalanta match, valid as the return leg of the UEFAÂ Champions League last 16, can be played as scheduled (in terms of date, start time and venue), but must take place behind closed doors."

Getafe's Europa League meeting with Inter, which is scheduled for next Thursday, is also likely to be affected, with Italian football currently experiencing major disruptions to their footballing calendar.

FiveÂ Serie AÂ matches were called off last weekend as government officials strived to contain the outbreak of coronavirus, including a top of the table clash betweenÂ JuventusÂ andÂ Inter.

Both this week'sÂ Coppa ItaliaÂ semi-final second legs were also postponed, withÂ all matches in Italy now set to be played behind closed doors until April 3.

Serie C sideÂ Pianese have quarantined their entire Under-23s side after three of their players and a staff member tested positive forÂ COVID-19 last week.

Elsewhere, the SwissÂ Super LeagueÂ has been put on hold until March 23, following a government ban on all events with more than 1000 predicted attendees.

InÂ England, a contingency plan is being put together which will also centre around a behind closed doors policy, with clubs working closely with doctors to put "best practice" in place across all leagues.

Manchester UnitedÂ signed Odion Ighalo on loan fromÂ Shanghai Shenhua in JanuaryÂ and was isolated from the rest of the first team for two weeks due to the fact the coronavirus originated inÂ China.

There have been 87,000 confirmed cases of the illness worldwide to date, and over 3,000 deaths, with 107 of those coming in Italy, which has been the worst affected country in Europe to date.