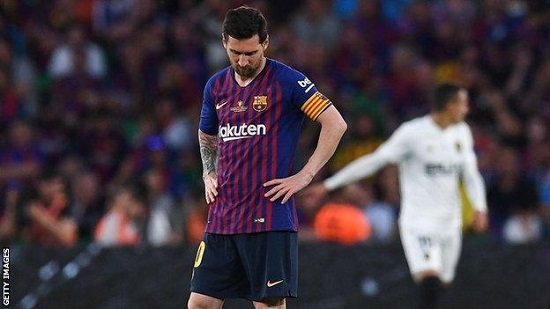 Ernesto Valverde's men said in the build-up that a win would help ease some of the pain of the Champions League loss to Liverpool, but they were sub-par again, in the Seville heat.

French forward Gameiro fired in a superb strike to give Valencia the lead before Rodrigo headed in the second.

After the match, Barcelona president Josep Maria Bartomeu backed Valverde to continue at the Nou Camp.

"I've always said that Ernesto has a contract for the next season, he's the coach," he said.

"I do not think this defeat is the coach's fault."

Valverde said: "When a coach loses you want to go again, to fight to overcome the next challenge. I know losing for this club is hard."

Temperatures reached north of 30C inside Real Betis' packed Estadio Benito Villamarin, but only one side wilted.