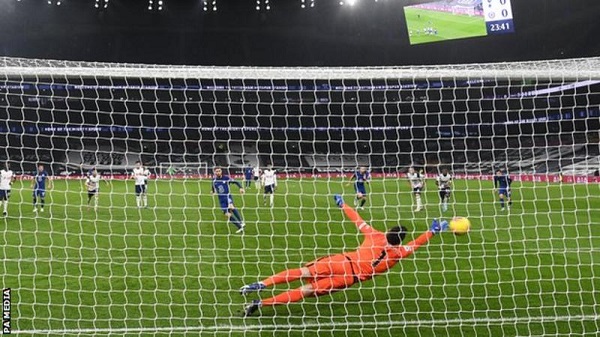 Tottenham manager Jose Mourinho criticised referee Andre Marriner's performance after his side lost at home to Chelsea, who continued their unbeaten start under new boss Thomas Tuchel and moved into the Premier League's top six.

Jorginho's first-half penalty, awarded after Eric Dier clumsily upended Timo Werner, gave the Blues a win their more progressive approach deserved against a Spurs side devoid of ideas and ambition until it was too late.

But Mourinho, who talked to Marriner at length as they walked off the pitch on Thursday, said: "I consider him one of the best referees in the Premier League. I care for him and one I have big admiration for him. That gives me a good position to tell him I did not like his performance.

"In the end a penalty decides the game. In the end they score a penalty which is not a penalty where you say it is a dangerous situation, one on one, almost scoring.

"It's a penalty that is difficult to accept and to lose the game like this is a bit painful."

Tuchel has now enjoyed two wins and a draw, without conceding a goal, since replacing the sacked Frank Lampard, and while the animated German occasionally displayed signs of frustration in his technical area, this was ultimately a satisfying outcome.

"The whole first half we totally controlled the game," said Tuchel. "Maybe we lost confidence in the second half because we lost the ball possession.

"A bit more killer instinct and more aggression in the box would have been nice. It was a big win in an away game and I am very happy."

In contrast, it was a third successive defeat in a dismal sequence for Tottenham and Mourinho, as they were punished for a desperately negative gameplan which, shorn of main marksman Harry Kane, barely gave Chelsea an anxious moment until Carlos Vinicius headed Serge Aurier's cross wide at the far post when unmarked late on.