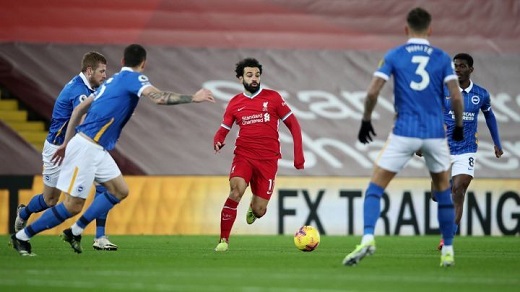 Steven Alzate bundled in the winner on 56 minutes as Liverpool suffer just their second home defeat in the league in little under four years.

Steven Alzate was credited with bundling in the winner in the 56th minute and Liverpool could not respond as they failed to score for the third successive home league game. With leaders Manchester City beating Burnley earlier on Wednesday, fourth-placed Liverpool are now seven points behind Pep Guardiola's side having played one game more.

Brighton followed up their weekend home win over Tottenham Hotspur with another disciplined display and a toothless Liverpool could have few complaints. Alzate was in the right place at the right time as a towering header by Dan Burn was cleared straight at him and he directed it past Liverpool keeper Caoimhin Kelleher.

While Liverpool pressed in a desperate bid to break down Brighton's blue defensive wall, they were occasionally exposed at the other end with Leandro Trossard and Yves Bissouma both going close to doubling Brighton's advantage. Brighton held on comfortably to move 10 points above the relegation zone into 15th place.