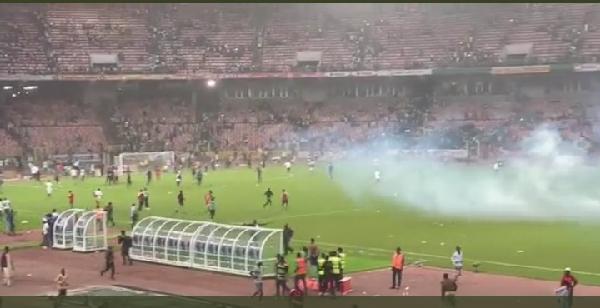 Fans of the Super Eagles of Nigeria could not take the pain of missing out on qualification to the 2022 edition of the World Cup.

The fans watched on at the Moshood Abiola Stadium on Tuesday night as the Black Stars of Ghana rather booked a ticket to Qatar 2022.

After the match, the fans storm the pitch destroying anything that they could lay their hands on.

The Super Eagles' dream of qualifying for their seventh World Cup were shattered by Ghana on Tuesday.

Ghana picked up one of the five African slots after edging Nigeria on away goal on a 1-1 aggregate. The first leg in Kumasi ended 0-0 while the second leg finished 1-1 in Abuja.
In a frantic game at the Moshood Abiola Stadium in Abuja, it was the Black Stars who had a dream start as Thomas Partey scored in the 11th minute.

He unleashed a drive behind the box which the goalkeeper Francis Uzoho failed to deal with.

Victor Osimhen almost drew parity for his side but his shot went wide.

Nigeria were awarded a penalty following a VAR review for a foul on Ademola Lookman by Denis Odoi.

Troost Ekong made no mistake from the spot as he sent Joojo Wollacot the wrong way to level the scores on 22nd minute.

Minutes later Victor Osimhen beat Wollacot and put Nigeria in the lead for the first time however his celebration was cut short as referee Sadok Selmi indicated no goal after a VAR review showed the Napoli striker was offside.

Both teams failed to breach each other defense in the second half and the referee brought proceedings to an end after 90 minutes of regulation time.