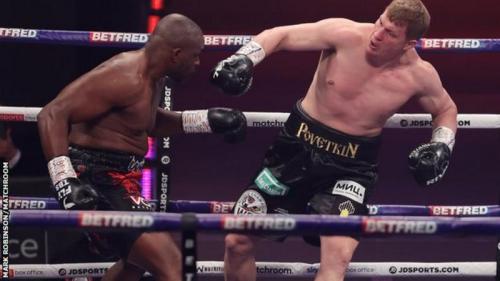 Dillian Whyte kept alive his hopes of a heavyweight world title shot by emphatically gaining revenge over Alexander Povetkin with an impressive knockout win in their rematch.

The Briton, 32, showed smart timing from the off in Gibraltar before a decisive attack in the fourth round.

A right hand sent Povetkin backwards, another sent him into the ropes and a left hook floored him heavily.

He found his feet but was rightly stopped to suffer his third loss.

Only Anthony Joshua and Wladimir Klitschko had previously beaten Povetkin in 39 fights.

Some questioned if Whyte was right to take an immediate rematch after a horrific knockout defeat by the Russian in August but after four well-crafted rounds, BBC Radio 5 Live commentator Mike Costello said his performance would "reverberate" around the heavyweight division.

"I am just sad I didn't get it finished in the first round," said Whyte. "He is a tough guy but I felt I could have finished it early.

"I want the world title."

Revenge, risk and a wait

Whyte will likely need to wait some time for a world title shot if Joshua and Tyson Fury - who hold all four major belts between them - finalise the details for two successive bouts.

August's loss to the wily and experienced Povetkin ultimately cost Whyte his position in the queue for a title fight and a second defeat would have all but wiped out his status as an elite name in the division.

Such was the significance of the bout for his career, late moves were made to switch it to Gibraltar so that Whyte could avoid the disruption of a 10-day quarantine in a Covid-secure UK fight bubble.

Private planes were chartered for stakeholders and Povetkin. Whyte stayed on a super yacht close to the fight venue. Those attending from the UK signed up to a handful of Covid-19 tests to make hopes of using the obscure fight base become a reality.

Whyte agreed to a cut in his fight purse to deliver the venue switch and when the lights dimmed at the Europa Point Sports Complex he played his part perfectly in front of 500 fans.

In a robe sporting 'RIP Hagler' in tribute to the late middleweight 'Marvelous' Marvin Hagler, Whyte bounced on the spot as his ring walk music played, seemingly bristling with energy as the chance to right wrongs drew closer.

From the bell he kept Povetkin's fierce power at distance and his rival - who contracted Covid-19 late in 2020 - looked shaky on his legs early on, losing his balance even as punches flew past his head.

Whyte crisply landed a jab-right hand combination in the second, and he drove home a well-timed counter right in the third before the fourth saw him ruthlessly strike - the decisive left hook delivered with an arrogance befitting of a final blow.

Whyte has admirably taken risk after risk in choosing opponents. It may still be true that his risk in facing Povetkin in August proves costly to his hopes of landing a title shot.

For 41-year-old Povetkin, retirement now surely looms while for Whyte there are at least exciting possibilities on the horizon again.

This manner of this win shows he is a worthy contender. He has moved on from a brutal setback in the most emphatic way possible.