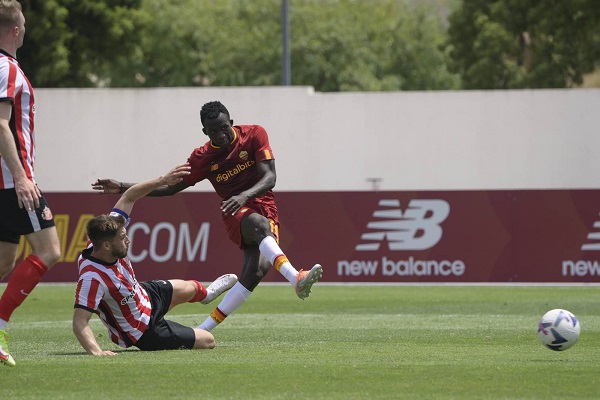 Black Stars forward Felix Afena-Gyan was on target as AS Roma defeated Sunderland 2-0 in a preseason friendly on Wednesday.

The 19-year-old came on in the second half to replace Stephan El Shaarawy and went on to score the opening goal of the game.

Afena-Gyan applied a smart finish in the 75th minute to put Jose Mourinho’s side in front, before Nicolo Zaniolo added a second with 10 minutes left as Roma run out as winners.

This is the first pre-season game Afena-Gyan has featured in, having been granted an extended break after playing in the Africa Cup of Nations (AFCON) qualifiers in June.

The Ghanaian also recently signed a long-term contract with Roma after making 25 appearances in all competitions for last season and scoring two goals.

The young striker had his breakthrough last season after being promoted to the senior team by Mourinho and ended the campaign as a UEFA Conference League winner.