VIDEO: Messi scores twice as Barcelona return to the top of La Liga 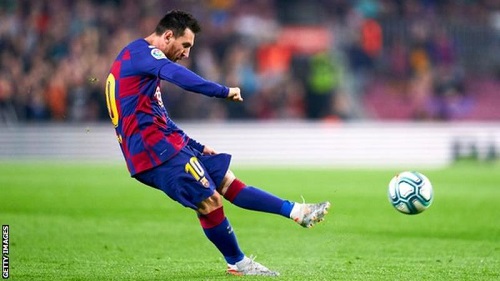 Barcelona defender Clement Lenglet drove in an early goal before Kiko bundled in for Valladolid.

Arturo Vidal poked in from Messi's pass to restore Barcelona's lead before the Argentine curled in a superb free-kick - the 50th such goal of his career.

"There were wonders coming out of his foot," said Valladolid's Michel.

"You can only applaud and enjoy it."

There was more Messi magic to come in the second half as he superbly controlled an Ivan Rakitic ball with one touch before powering a fierce drive into the back of the net with another.

He then completed his fine performance by slipping a ball through the defence for Luis Suarez to sweep in his side's fifth.

Barcelona were not in action at the weekend after their game with Real Madrid was postponed because of safety fears surrounding the ongoing protests in Catalonia.

That allowed Granada, who had only returned to the top flight this season, the opportunity to instead become the Spanish top flight's unlikely leaders as they beat Real Betis 1-0.

Barcelona needed to win to reclaim top spot, which they did in impressive style with Messi at his scintillating best.

Earlier, Atletico Madrid were held to a 1-1 draw by Alaves.